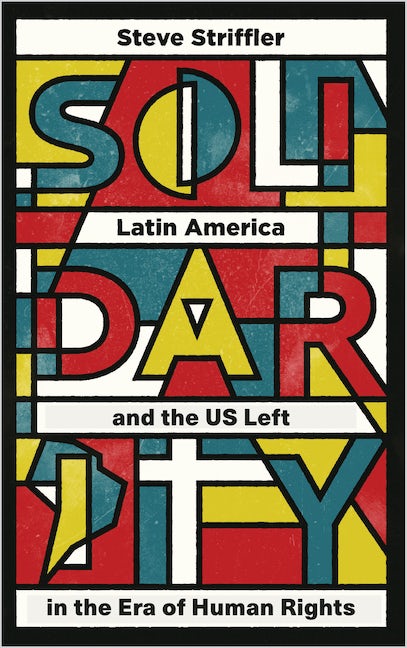 The first comprehensive history of US-Latin American solidarity from the Haitian Revolution to the present day.
How and why has solidarity changed over time? Why have particular strategies, tactics, and strands of internationalism emerged or re-emerged at particular moments? And how has solidarity shaped the history of the US left in particular?

In Solidarity, Steve Striffler addresses all these questions, offering the first history of US-Latin American solidarity from the Haitian Revolution to the present day. Striffler traces the history of internationalism through the Cold War, exploring the rise of human rights - and later labour issues - as the dominant currents of international solidarity. He also considers the limitations of a solidarity movement today that inherited its organisational infrastructure from the human rights movements.

Moving beyond conventionally ahistorical analyses of solidarity, here Striffler provides a distinctive intervention in the history of progressive politics in both the US and Latin America, the past and present of US imperialism and anti-imperialism, and the history of human rights and labour internationalism.

Steve Striffler is the Director of the Labor Resource Center and Professor of Anthropology at the University of Massachusetts-Boston. He is the author of Solidarity: Latin America and the US Left in the Era of Human Rights (Pluto, 2018), and In the Shadows of State and Capital (Duke, 2002).

'A masterful account of US and Latin American solidarity. Exploring multiple strands of 20th century internationalism and incisive in its argumentation, 'Solidarity' pushes us to think about what a radical, left internationalism might look like today' - Lesley Gill, Professor of Anthropology, Vanderbilt University 'An indispensable guide for how to be in a world dominated by a form of capitalism that is fast making its peace with fascism' - Greg Grandin, New York University, author of 'Fordlandia: The Rise and Fall of Henry Ford's Forgotten Jungle City' 'A brilliant introduction to the history of Latin American solidarity movement building ... a jargon-free study of the struggle to build solidarity across borders in the Americas' - Paul Ortiz, author of 'An African American and Latinx History of the United States' 'An extraordinarily important book. I know no one better equipped or positioned to examine this important stream of US politics' - Adolph Reed, University of Pennsylvania