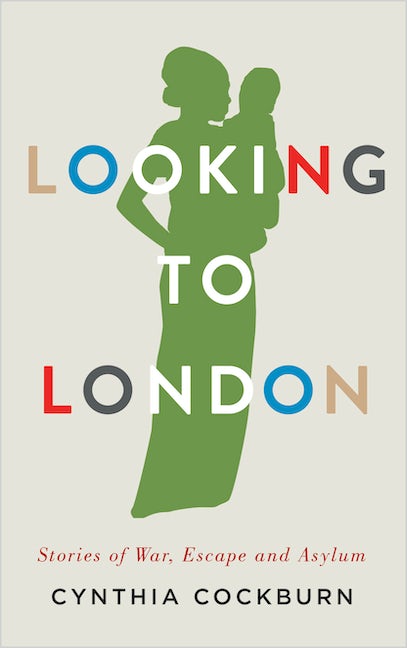 Stories of War, Escape and Asylum

A journey through five London boroughs, revealing the lives of asylum seekers today
The city of London is celebrated as one of the most ethnically diverse capitals in the world, and has been a magnet of migration since its origin. Looking to London steps into the maelstrom of current and recent wars and the resulting migration crisis, telling the stories of women refugees who have made it to London to seek safe haven among the city's Kurdish, Somali, Tamil, Sudanese and Syrian communities, under the watchful eye of the security services.

Cynthia Cockburn brings her lively and lucid style to a world in which hatred is being countered by compassion, at a moment when the nationalist, anti-immigrant sentiment expressed in Brexit is being challenged by a warm-hearted 'refugees welcome' movement bringing community activists into partnership with London borough councils for the reception and rehoming of victims of war.

This book is essential reading for all who want to think more deeply about the meaning of asylum.

Cynthia Cockburn is an Honorary Professor at the Centre for the Study of Women and Gender, University of Warwick, and City University London. A researcher and writer in the field of gender, war and peacemaking, she is active in the international women's peace movement. Her most recent books are Antimilitarism (Palgrave Macmillan, 2012), From Where We Stand (Zed Books, 2007) and Looking to London (Pluto, 2017).

'Now, more than ever, it is vital to support women who have crossed borders. By listening to women from across the world who have made their homes in London, Cynthia Cockburn brings us stories that we need to hear in order to challenge divisions and build solidarity' - Natasha Walter author of The New Feminism (Virago, 1998) and founder of Women for Refugee Women. 'Makes one want to hop on a red bus to explore each of the city's vibrant neighbourhoods - to immerse oneself in the local lives of politically engaged women in a way that enables one to grasp the lasting effects of wartime violence' - Cynthia Enloe, author of Bananas, Beaches and Bases (University of California Press, 2014) 'A profoundly humanising and moving book that inspires and provides hope' - Nadje Al-Ali, author of Iraqi Women: Untold Stories from 1948 to the Present (Zed Books, 2007)
Acknowledgements
Introduction
1. London: Magnet for Migrants
2. From South-East Turkey to North-East London: Kurds in Hackney
3. From the Horn of Africa to the Isle of Dogs: Somalis in Tower Hamlets
4. Home for Whom? Tamils in Hounslow and Home Office Detention
5. The Sudans' Divided People Come To Camden
6. Syrian War, Migration Crisis and 'Refugees Welcome' in Lambeth
Notes
Index
Published by Pluto Press in Sep 2017
Paperback ISBN: 9780745399218
eBook ISBN: 9781786801272

END_OF_DOCUMENT_TOKEN_TO_BE_REPLACED
Back to Top
X