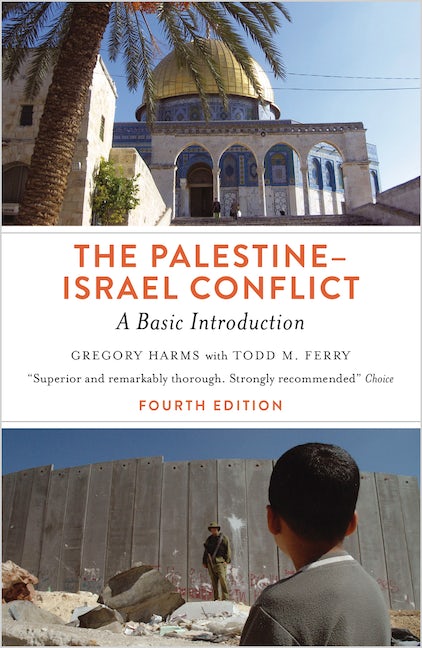 The Palestine-Israel Conflict provides a balanced, accessible, and annotated introduction that covers the full history of the region, from Biblical times until today. Perfect for the general reader, as well as students, it offers a comprehensive yet lucid rendering of the conflict, setting it in its proper historical context. This fourth edition brings us up to date, and includes recent events such as Israel's Operation Protective Edge, developments between Fatah and Hamas, ongoing Palestinian resistance, and the entirety of the Obama years.

This book cuts though the layers of confused and contradictory information on the subject, and will help clarify the ongoing conflict for its readers.

Gregory Harms is an independent scholar based in Chicago. He is co-author of the classic textbook The Palestine-Israel Conflict (Pluto, 2017) and author of Straight Power Concepts in the Middle East (Pluto, 2010).

Todd M. Ferry is an archaeologist and historian. He received his MA in Syro-Palestinian Archaeology from the University of Chicago, and has worked as a supervisor at the sites of Ashkelon and Tel Beth Shemesh in Israel. He is the co-author of the classic textbook The Palestine-Israel Conflict (Pluto, 2017).

'This superior and remarkably thorough, if brief, study of the Holy Land enigma is strongly recommended as an introduction' - CHOICE 'A tour de force in the depth and breadth of its research and in its clarity' - Gabriel Kolko, Distinguished Research Professor Emeritus at York University in Toronto and author of The Age of War 'Gregory Harms has taken an enormously complex issue and made it engagingly accessible. An intelligent, thoughtful and comprehensive introduction to a terribly and consistently misunderstood conflict' - Sara Roy, Senior Research Scholar, Center for Middle Eastern Studies, Harvard University, and author of Failing Peace. 'An approachable, balanced guide for the perplexed public' - Journal of Palestine Studies
List of Maps
Acknowledgements
Preface to the Fourth Edition
Introduction
Part I: Regional History
1. Canaan-Palestine: Ancient History - Todd M. Ferry
2. Muhammad, Islam and the Arab Empire
3. The Crusades to the Ottoman Empire
Part II: Origins
4. Jewish Persecution and Zionism
5. Palestine
6. The Genesis of Conflict: Across Two World Wars
Part III: Conflict
7. Partition, Israeli Statehood and the Six-Day War: 1947-1967
8. The Continuation of the Arab-Israeli Conflict: 1967-Lebanon 1982
9. The First Intifada and the Peace Process
10. The Second Intifada, Gaza and the Obama Years: 2000-2016
Conclusion
Appendices
Notes
Suggested Reading
Select Bibliography
Index
Published by Pluto Press in Jul 2017
Paperback ISBN: 9780745399263
eBook ISBN: 9781786801142

END_OF_DOCUMENT_TOKEN_TO_BE_REPLACED
Back to Top
X