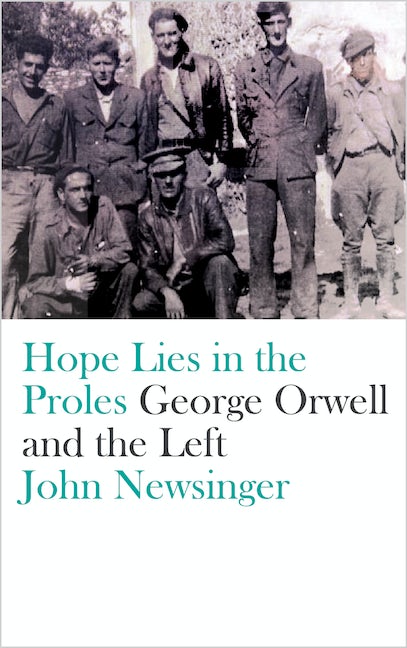 A critical account of George Orwell's politics, exploring his anti-fascism, criticism of the USSR and enduring commitment to socialism
George Orwell was one of the most significant literary figures on the left in the twentieth century. While titles such as 1984, Animal Farm and Homage to Catalonia are still rightly regarded as modern classics, his own politics are less well understood.

Hope Lies in the Proles offers a sympathetic yet critical account of Orwell's political thinking and its continued significance today. John Newsinger explores various aspects of Orwell's politics, detailing Orwell's attempts to change working-class consciousness, considering whether his attitude towards the working class was romantic, realistic or patronising - or all three at different times. He also asks whether Orwell's anti-fascism was eclipsed by his criticism of the Soviet Union, and explores his ambivalent relationship with the Labour Party. Newsinger also breaks important new ground regarding Orwell's shifting views on the USA, and his relationship with the progressive Left and feminism.

John Newsinger is Professor of Modern History at Bath Spa University. He is the author of over a dozen books, including Hope Lies in the Proles (Pluto, 2018), the graphic novel 1917: Russia's Red Year (Bookmarks, 2016), British Counterinsurgency (Palgrave, 2015), and The Blood Never Dried: A People's History of the British Empire (Bookmarks, 2006).

'George Orwell remains one of the most influential thinkers in the world today. Here, John Newsinger, in his insightful, lucid, engaging and original examination of the evolution of Orwell's politics, shows precisely why' - Richard Lance Keeble, Professor of Journalism, Lincoln University, and Chair of the Orwell Society 'This book confirms John Newsinger's status as one of our leading Orwell scholars. Clear, wide-ranging and bracingly polemical, it casts new light on the way that Orwell's response to the events of his time was shaped by his idiosyncratic brand of radical socialism.' - Philip Bounds, author of Orwell and Marxism: The Political and Cultural Thinking of George Orwell (2009)
Abbreviations
Introduction: Discovering Orwell
1. ‘Until They Become Conscious They Will Never Rebel’: Orwell and the Working Class
2. ‘Why I Join the ILP’: Orwell and the Left in the Thirties
3. ‘Giants are Vermin’: Orwell, Fascism and the Holocaust
4. ‘A Long Series of Thermidors’: Orwell, Pacifism and the Myth of the People's War
5. ‘It is Astonishing How Little Change has Happened’: Orwell, the Labour Party and the Attlee Government
6. 'Ceaseless Espionage’: Orwell and the Secret States
7.‘2+2=5’: Orwell, Nineteen Eighty-Four and the New Left
Conclusion: ‘Capitalism Has Manifestly No Future’ - Orwell Today
Notes
Index

What is the contemporary relevance of George Orwell? John Newsinger, author Hope Lies in the Proles, considers the tangents and trajectories of the author’s political thought.

END_OF_DOCUMENT_TOKEN_TO_BE_REPLACED
Back to Top
X