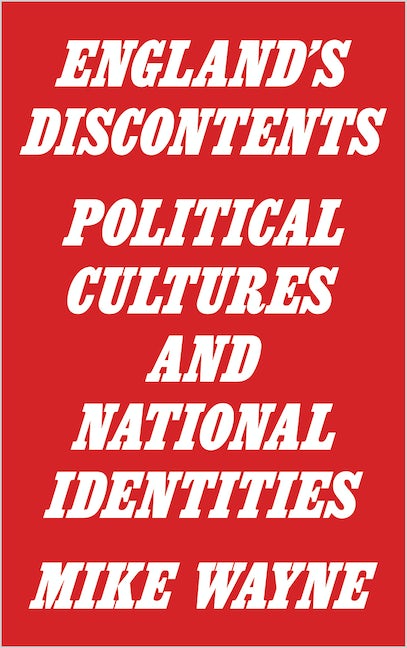 In doing so, he reveals that England's enduring attachment to economic liberalism is in danger of eroding all other political cultures, even conservatism, liberalism and the British state.

'This is a hugely ambitious and seriously rewarding genealogy of Britishness. Navigating the East India Company and Brexit, conservatism and liberalism, Gramsci and Stuart Hall, Mike Wayne has produced a fantastic analysis of the contradictions of our political culture' - Des Freedman, Professor of Media and Communications, Goldsmiths, University of London 'Wayne's excellent book delivers home truths and important historical lessons with authority, clarity and conviction. Its call for a radical version of social democracy is both convincing and energising. Anyone seeking the sign-posts for social change should read this' - Anita Biressi, Professor of Media and Society, University of Roehampton 'In the aftermath of Brexit, Mike Wayne's provocative re-reading of the tangled historical relations between Britain's contesting political cultures forces us to think again about the exercise of power, the imagination of nationhood and the possibilities for change' - Graham Murdock, Professor of Culture and Economy, Loughborough University 'Provides a valuable analysis of how Britain is ruled and the ideology and culture of its elite' - Counterfire 'An exploration of English national identity that provides a highly effective insight towards understanding the politucal terrain of post-Brexit Britain' - Philosophy Football
Introduction
1. Political Cultures and National Identities: A Gramscian Framework
2. The Formation of Political Cultures
3. Conservative Culture and the Economy
4. Conservative Culture and the State
5. The Oscillations of Liberalism
6. Geopolitical Discontents: A Tale of Two Referendums
7. Hegemony in Question: Stuart Hall, Gramsci and Us
8. Going Forwards, Facing Backwards
Notes
Index
Published by Pluto Press in Oct 2018
Paperback ISBN: 9780745399331
eBook ISBN: 9781786803221

Stuart Hall and Gramsci
On Conservatism and Social Liberalism

What lessons can Stuart Hall and Gramsci teach us about the difficult relationship between conservatism and social liberalism? And what can that tell us about the way that political cultures have shaped British identities in recent years?

END_OF_DOCUMENT_TOKEN_TO_BE_REPLACED

END_OF_DOCUMENT_TOKEN_TO_BE_REPLACED
Back to Top
X