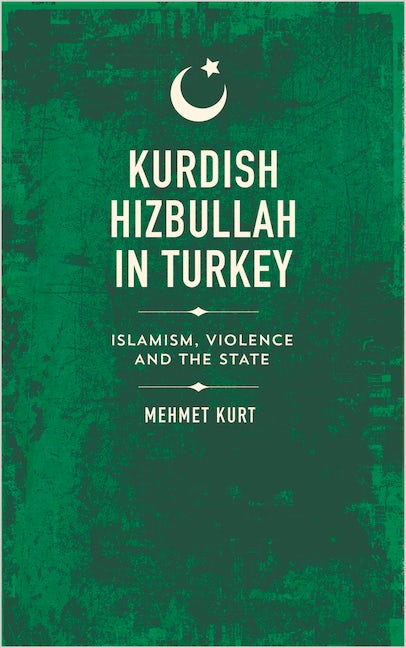 Islamism, Violence and the State

Mehmet Kurt explores Hizbullah in Turkey's many paradoxes: notably its political rise and the apparent power of Islamism in a region in which leftist Kurdish political movements dominate political discourse; and its composition, which in its Sunni and Kurdish makeup, differs from the Shiite Hizbullah in Lebanon.

Through his unique position as an anthropologist, theorist and former Imam, Kurt produces a work of extraordinary insight: an ethnography comprised of extensive interviews with leaders, members and supporters of Hizbullah, revealing the manner in which Islamic civil society has taken root in a region where ethnic identity has been the primary organising tool against a repressive and violent state.

Mehmet Kurt is the British Academy Newton Advanced Post-Doctoral Fellow at Queen Mary University of London. His areas of expertise are Kurdish Islamist groups, social movements, radicalisation, the Kurdish issue in Turkey, visual ethnography and oral history. He is the author of Kurdish Hizbullah in Turkey (Pluto, 2017).

'An excellent ethnographic analysis of the impact of Islamism within the Kurdish movement in Turkey, a must read for those especially interested in the interaction of religion and ethnic identity in the Middle East' - Fatma Müge Göçek, Professor of Sociology and Women's Studies, The University of Michigan 'With deep personal knowledge, Mehmet Kurt offers us an unrivalled insight into the world view of those involved in this important Kurdish Islamic movement. He shows how deeply and broadly embedded Hizbullah is, and how it may well help shape the future' - David McDowall, author of A Modern History of the Kurds 'The first major anthropological study of Turkey's Hizbullah, the most important Kurdish Islamist movement' - Martin van Bruinessen, Professor of the Comparative Study of Contemporary Muslim Societies, Utrecht University
Preface to the English Translation
Acknowledgements
Introduction
1. Historical Overview of Hizbullah
2. The 'Grounded' Dimensions of Hizbullah as Islamist Organisation and Social Movement
3. The Construction of Social Memory in the Stories and Novels of Hizbullah
Conclusion
Appendix: The Text of the Written Interview with Hizbullah Officials
Notes
Bibliography
Index
Published by Pluto Press in Mar 2017
Hardcover ISBN: 9780745399348