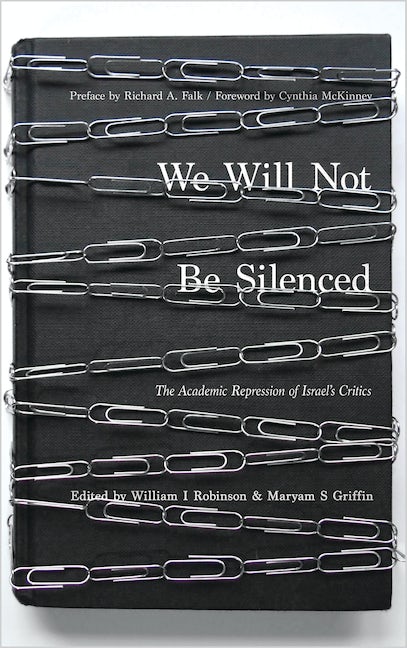 We Will Not Be Silenced

The Academic Repression of Israel's Critics

Edited by William I Robinson and Maryam S Griffin

As criticism continues to mount over Israel's violation of Palestinian human rights and of international law, campaigns to silence and repress those who speak out against Israeli apartheid have grown alarmingly.

College and university campuses across the United States now find themselves centre stage in this conflict over free speech: targeted by the Israel 'lobby' for the critical content of their scholarship, academics have been turned away from jobs, denied tenure and promotion, rejected for funding, and even expelled from institutions, while student groups like the 'Irvine 11' have faced harassment and sanctions.

From establishment figures like Richard Falk and former US Congresswoman Cynthia McKinney, to professors, postgraduates and activist alumni, We Will Not Be Silenced contains thirteen testimonials from those whose struggle to defend their academic freedom has garnered widespread public and international attention.

Maryam S. Griffin is a University of California President’s Postdoctoral Fellow at UC Davis. She holds a J.D. from the UCLA School of Law and a Ph.D. in Sociology from UC Santa Barbara. She is a co-editor of We Will Not Be Silenced (Pluto, 2017).

Cynthia McKinney served six terms in the United States Congress between 1993-2007, as the first black woman to represent the state of Georgia in the House of Representatives. Since leaving Congress she has been a tireless champion of numerous peace and social justice struggles around the world. She is a contributor to We Will Not Be Silenced (Pluto, 2017).

Richard Falk was formerly the UN special rapporteur to Palestine. His unparalleled scholarship on Israel/Palestine is informed by a deep commitment to humanist thought and an optimism for the future of the Palestinian struggle. He is Professor Emeritus of International Law at Princeton University and a Research Fellow in Global Studies at the University of California at Santa Barbara. He is the author of over twenty books including Palestine's Horizon (Pluto, 2017) and Chaos and Counterrevolution (Zed, 2015).

'These testimonials provide a stunning and all too familiar portrait of the extent to which the forces that suppress free speech and academic freedom are at work in the U.S. university system'

'It is perhaps no surprise that as Israel drifts towards repression and reaction within, and becomes increasingly isolated internationally as a result of the harsh and criminal occupation, its informal lobby in the US becomes more desperate to stifle free and open discussion of the state they seek to protect. Efforts of the kind sampled here, targeting the academic world, are as deplorable as they are predictable, and should be dismissed with contempt, and strongly opposed.'

'The insightful and captivating testimonials in this book are ... not just about challenging the 'Israel exception to free speech'; they are also about protecting civil liberties and democratic rights at large against the ominous rise of McCarthyism 2.0'

- Omar Barghouti, Scholar and Co-founder of the Boycott, Divestment, and Sanctions movement (BDS) and the Palestinian Campaign for the Academic and Cultural Boycott of Israel (PACBI)

Foreword by Cynthia McKinney
Preface by Richard A. Falk
Introduction: Academic Repression on US University Campuses - William I. Robinson and Maryam S. Griffin
1. The Trial of Israel’s Campus Critics - David Theo Goldberg and Saree Makdisi
2. They Shoot Tenure, Don’t They?: How I Crossed the Borders of Acceptable Academic Discourse on Holocaust Film and the Question of Palestine, and Never Came Back - Terri Ginsberg
3. My Ordeal with the Israel Lobby and the University of California - William I. Robinson
4. The Irvine 11: Power, Punishment, and Perseverance - Taher Herzallah with Osama Shabaik
5. A Problem Grows in Brooklyn - Kristofer J. Petersen-Overton
6. Speaking Truth to Power: Advocating for Justice in/for Palestine - Rabab Ibrahim Abdulhadi
7. Hanlon’s Razor Cuts Both Ways - David Delgado Shorter
8. The Intolerability of Intolerance - Persis Karim
9. Responding to Columbia University’s McCarthyism: Excerpts of Statement on March 14, 2005 to Columbia University Ad Hoc Grievance Committee - Joseph Massad
10. A Multiyear Zionist Censorship Campaign - David Klein
11. Some Thoughts on Facts, Politics, and Tenure - Nadia Abu El-Haj
12. Censoring and Sanctioning Students for Justice in Palestine - Max Geller
13. A So-called Self-hating, Anti-Semitic Jew Speaks Out - Lisa Rofel
14. Interrupted Destinies: Before and After and Forthwith - Steven Salaita
List of Resources
Notes on Contributors
Index