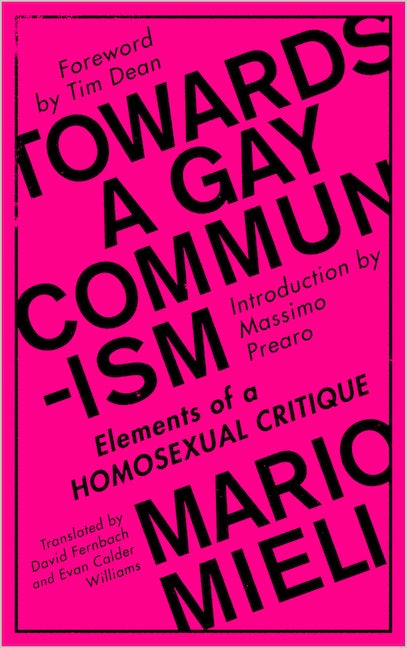 Towards a Gay Communism

Elements of a Homosexual Critique

Among the most important works ever to address the relationship between homosexuality, homophobia and capitalism, Mieli's essay continues to pose a radical challenge to today's dominant queer theory and politics.

With extraordinary prescience, Mieli exposes the efficiency with which capitalism co-opts 'perversions' which are then 'sold both wholesale and retail'. In his view the liberation of homosexual desire requires the emancipation of sexuality from both patriarchal sex roles and capital.

Drawing heavily upon Marx and psychoanalysis to arrive at a dazzlingly original vision, Towards a Gay Communism is a hitherto neglected classic that will be essential reading for all who seek to understand the true meaning of sexual liberation under capitalism today.

Mario Mieli was a leading figure in the Italian gay movement of the 1970s, respected as one of the movement's most profound intellectuals. He committed suicide in 1983 at the age of 30. His work Towards a Gay Communism (Pluto, 2018) was considered a controversial classic of the era.

'An indispensable, pioneering example of the long, difficult effort to articulate queer struggle with anti-capitalist struggle' - Kevin Floyd, author of The Reification of Desire: Toward a Queer Marxism (University of Minnesota Press, 2009) 'Mieli was considerably ahead of his time... Towards a Gay Communism belongs to a visionary tradition of ecstatic utopianism... A fascinating document of its departed moment, but also as renewable inspiration for our contemporary desire to envision a future that is foreign to today' - Tim Dean
Foreword: 'I Keep My Treasure in My Arse' by Tim Dean
Introduction by Massimo Prearo
Translator’s Preface by Evan Calder Williams
Preface
1. Homosexual Desire is Universal
2. Fire and Brimstone, or How Homosexuals Became Gay
3. Heterosexual Men, or Rather Closet Queens
4. Crime and Punishment
5. A Healthy Mind in a Perverse Body
6. Towards a Gay Communism
7. The End
Appendix A: Unpublished Preface to Homosexuality and Liberation by Mario Mieli (1980)
Appendix B: Translator’s additional note from Chapter 1
Index
Published by Pluto Press in May 2018
Paperback ISBN: 9780745399515
eBook ISBN: 9781786800541

Revolutionary queer theorist Mario Mieli is the author of one of the most important works ever to address the relationship between homosexuality, homophobia and capitalism. In this blog, Tim Dean considers the relevance of the...

END_OF_DOCUMENT_TOKEN_TO_BE_REPLACED
Back to Top
X