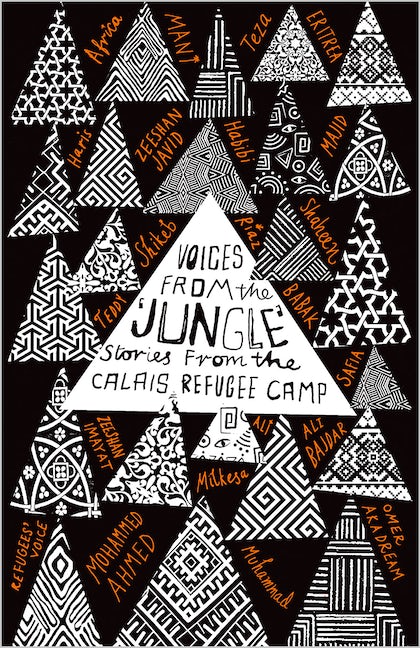 Voices from the 'Jungle'

Stories from the Calais Refugee Camp

A shocking but inspirational collection of stories by refugees in the former Calais camp in France
Often called the 'Jungle', the refugee camp near Calais in Northern France epitomises for many the suffering, uncertainty and violence which characterises the situation of refugees in Europe today. But the media soundbites we hear ignore the voices of the people who lived there - people who have travelled to Europe from conflict-torn countries such as Syria, Sudan, Afghanistan and Eritrea: people with astounding stories, who are looking for peace and a better future.

Voices from the 'Jungle' is a collection of these stories. Through its pages, the refugees speak to us in powerful, vivid language. They reveal their childhood dreams and struggles for education; the wars and persecution that drove them from their homes; their terror and strength during their extraordinary journeys. They expose the reality of living in the camp; tell of their lives after the 'Jungle' and their hopes for the future. Through their stories, the refugees paint a picture of a different kind of 'Jungle': one with a powerful sense of community despite evictions and attacks, and of a solidarity which crosses national and religious boundaries.

Illustrated with photographs and drawings by the writers, and interspersed with poems, this book must be read by everyone seeking to understand the human consequences of this world crisis.

'These first-hand accounts of the suffering endured by the refugees fleeing unmitigated horror in their homelands paints a far more vivid picture than anything we read in the press or see on television. If you want to understand fully the extent of what refugees are being forced to endure under our very noses, please read this book' - Julie Christie 'Home is the first thing we experience as human beings in this world; somewhere we know, safe and warm, somewhere that keeps us. When we are forced out, we lose a little bit of ourselves; leaving us less whole. However, through these poems, these stories, we reclaim that home and the humanity that is lost with what comes with being labelled a refugee. Writing this is not only a way for the world to know us, but a way that we may know ourselves, once again' - JJ Bola, Writer, Poet, Author of No Place to Call Home (2017) 'Read this powerful book' - Counterfire 'Gives those who have been ignored, dehumanised and abused because of who they are the platform they deserve to explain the reality of life as a refugee' - Morning Star
Introduction
1. Home
2. Journeys
3. Living in the ‘Jungle’: Arriving, Exploring and Settling In
4. Living in and Leaving the ‘Jungle’: Connecting, Longing and Trying to Leave
5. Life After the ‘Jungle’
Conclusion
Published by Pluto Press in Apr 2017
Paperback ISBN: 9780745399683
eBook ISBN: 9781786800824

We bring together refugees’ stories from the refugee camp near Calais known as the ‘Jungle’.

PODCAST: ‘Radicals in Conversation’ – Voices from the ‘Jungle’

This is the story of ‘Africa’ – one of the many people who lived, for a time, in the Calais Refugee Camp known as the ‘Jungle’.

END_OF_DOCUMENT_TOKEN_TO_BE_REPLACED
Back to Top
X