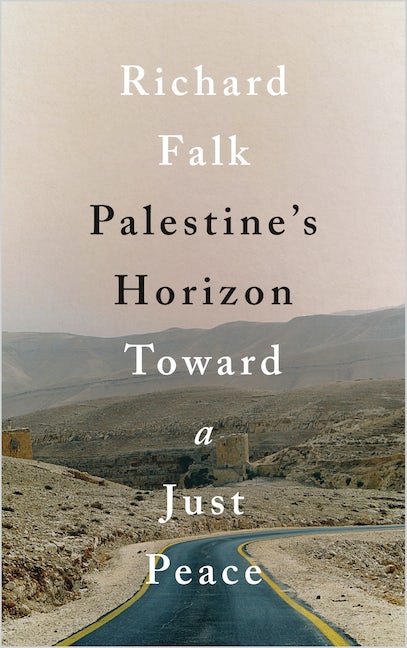 Toward a Just Peace

The former UN Special Rapporteur for Palestine brings his life's work together to discuss how the region can find peace
Richard Falk has dedicated much of his life to the study of the Israel/Palestine conflict. In Palestine's Horizon, he brings his experiences to bear on one of the most controversial issues of our times.

After enduring years of violent occupation, the Palestinian movement is exploring different avenues for peace. These include the pursuit of rights under international law through the UN and International Criminal Court, and the new emphasis on global solidarity and non-violent militancy embodied by the Boycott, Divestment and Sanctions Campaign (BDS).

In focusing on these new tactics of resistance, Falk refutes the notion that the Palestinian struggle is a 'lost cause'. He also reflects on the legacy of Edward Said and the importance of his humanist thought in order to present a vision of peace that is mindful of the formidable difficulties of achieving a just solution to the long conflict.

Richard Falk was formerly the UN special rapporteur to Palestine. His unparalleled scholarship on Israel/Palestine is informed by a deep commitment to humanist thought and an optimism for the future of the Palestinian struggle. He is Professor Emeritus of International Law at Princeton University and a Research Fellow in Global Studies at the University of California at Santa Barbara. He is the author of over twenty books including Palestine's Horizon (Pluto, 2017) and Chaos and Counterrevolution (Zed, 2015).

'For almost half a century ... Falk has brought powerful moral and legal insights to debates about order and justice in world politics' - Foreign Affairs 'Falk's contributions combine unparalleled experience and scholarship. This is a wonderful synthesis of his work on Palestine and Israel in a single and accessible volume' - Noura Erekat, Human Rights Attorney and Assistant Professor, George Mason University 'For anyone desiring a comprehensive and detailed insight into the dynamics of legitimate Palestinian struggle against Israeli colonial violence, this book is highly recommended' - Middle East Monitor 'Offers a dose of much needed optimism and hope to the cause' - Middle East Journal

Former United Nations Special Rapporteur for Palestine Richard Falk found himself in the midst of controversy over a report, which concluded that ‘beyond a reasonable doubt, Israel is guilty of imposing an apartheid regime on the Palestinian...

END_OF_DOCUMENT_TOKEN_TO_BE_REPLACED
Back to Top
X