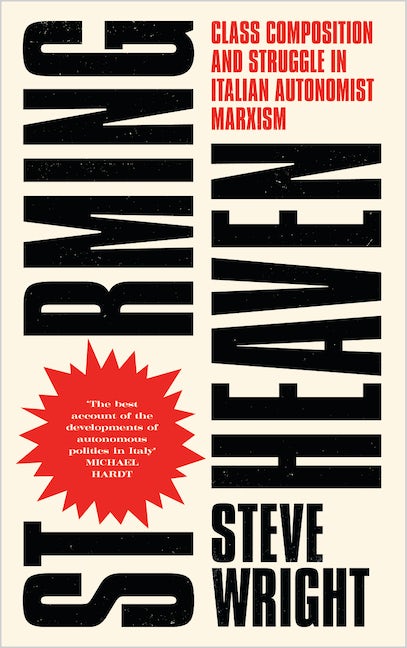 A history of Italian workerist theory, taking in Antonio Negri, Mario Tronti and Sergio Bologna
Storming Heaven is the only book which looks at Italian workerist theory and practice, from its origins in the anti-Stalinist left of the 1950s to its heyday twenty years later. It focuses on the theme of workerism, or 'operaismo', which includes the refusal of work, class self-organisation, mass illegality and the extension of revolutionary agency, of of which are still practiced today by workers across the world.

Emphasising the dynamic nature of class struggle as the distinguishing feature of workerist thought, Storming Heaven reveals how this form of radical politics developed alongside emerging social movements to great effect. It assesses the strengths and limitations of workerism as first developed by Antonio Negri, Mario Tronti, Sergio Bologna and others.

This edition includes a new chapter looking at the debates around operaismo and Autonomia since the book originally appeared in 2002, and is updated with a new foreword and afterword.

Steve Wright is Senior Lecturer in the Faculty of Information Technology at Monash University. He is the author of the classic survey of Italian autonomist theory Storming Heaven (Pluto, 2017), now in its second edition.

Riccardo Bellofiore is Professor of Political Economy at the University of Bergamo. He is the co-editor of The Constitution of Capital: Essays on Volume I of Marx's 'Capital' (Palgrave, 2004).

Massimiliano Tomba is in the Department of Political and Juridical Sciences and International Studies at the University of Padova. He is the author of Marx's Temporalities (Haymarket, 2014).

'The best account in English of the developments of autonomous politics in Italy in the 1960s and '70s' - Michael Hardt, co-author with Antonio Negri of Empire 'As the most wide-ranging, historically nuanced and theoretically incisive treatment of the contested tradition of operaismo, Wright's book is an indispensable contribution to the study, critique or revitalisation of Italy's foremost contribution to Marxian heterodoxy' - Alberto Toscano Goldsmiths, University of London 'A vital, lucid contribution to understanding how the red threads of Marxism are being rewoven into the fabric of twenty-first century radicalism' - Nick Dyer-Witheford, author of Cyber-Proletariat and Cyber-Marx
Foreword by Harry Cleaver
Acknowledgements
Introduction
1. Weathering the 1950s
2. Quaderni Rossi and the Workers' Enquiry
3. Classe Operaia
4. New Subjects
5. The Creeping May
6. Potere Operaio
7. Toni Negri and the Operaio Sociale
8. The Historiography of the Mass Worker
9. The Collapse of Workerism
10. Conclusion
Postscript: Once More, With Feeling: A Bibliographic Essay
Afterword to the Italian Edition by Riccardo Bellofiore & Massimiliano Tomba
Bibliography
Index
Published by Pluto Press in Jul 2017
Paperback ISBN: 9780745399904
eBook ISBN: 9781786801173