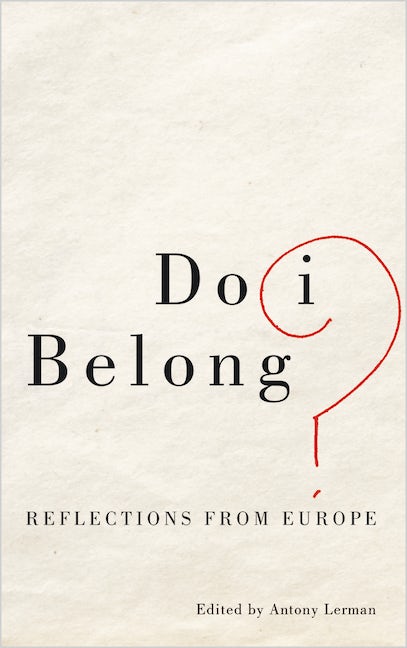 A collection of original essays by novelists, journalists and academics exploring belonging and identity in Europe

'Belonging' is both a fundamental human emotion and a political project that affects millions. Since its foundation in 1957, the European Union has encouraged people across its member states to feel a sense of belonging to one united community, with mixed results. Today, faced with the fracturing impacts of the migration crisis, the threat of terrorism and rising tensions within countries, governments within and outside the EU seek to impose a different kind of belonging on their populations through policies of exclusion and bordering.

In this collection of original essays, a diverse group of novelists, journalists and academics reflect on their own individual senses of European belonging. In creative and disarming ways, they confront the challenges of nationalism, populism, racism and fundamentalism.

Do I Belong? offers fascinating insights into such questions as: Why fear growing diversity? Is there a European identity? Who determines who belongs? Is a single sense of 'good' belonging in Europe dangerous? This collection provides a unique commentary on an insufficiently understood but defining phenomenon of our age.

'In today's world, no task is more crucial than the harmonious management of diversity. And none is more arduous. Whoever hopes to address that issue efficiently needs to listen to voices coming from all over the world and from all walks of life. Like the voices gathered in this book'

'Voices like the ones in this book show us the beauty of European diversity and the quest of belonging in a pluralistic society. In times of rising populism and nationalist closure we need to ask questions of how we want us and our children to live in a complex world in order to find answers for the missing link of togetherness.'

'A necessary and thought-provoking book at a time of dangerous changes in Europe ... these essays are a good remedy against growing fear and hatred'

- Slavenka Drakulić, author of The Balkan Express: Fragments From the Other Side of War and They Would Never Hurt a Fly

Terrorism and Belonging in Europe

How does terrorism reflect the economy, legitimacy, democracy, citizenship, multiculturalism and belonging in Europe’s ‘imagined community’?

END_OF_DOCUMENT_TOKEN_TO_BE_REPLACED
Back to Top
X