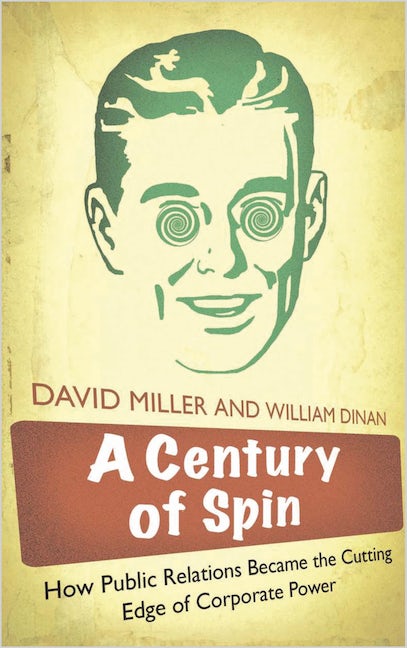 A Century of Spin

How Public Relations Became the Cutting Edge of Corporate Power

by David Miller and William Dinan

A history of the PR industry, and how it has shaped and corrupted politics.
This book charts the relentless rise of the public relations industry and how it has transformed our society. Revealing the roots of the PR movement in the years leading up to the First World War, it shows how it became a key tool in the struggle to subordinate democracy to corporate rule. It is the first book to offer a history of the emergence of corporate propaganda on both sides of the Atlantic during the 20th century.

The authors show how the origins of PR were always covertly political. Spin has been around for a long time and its anti-democratic potential is well known to all those who have made use of it. Based on extensive use of original archival material, the book presents a clear chronology of PR's development, culminating with a detailed examination of Gordon Brown and David Cameron's use of spin and how it relates to their connections with big business.

'Of all the transcendent powers that shape our modern lives, propaganda is the most powerful and insidious. This brilliant, original book reveals the secret truth about so-called public relations and should be required reading on every curriculum' - John Pilger
1. The cutting edge of corporate power
2. Public Relations: The Zelig complex
3. The hidden history of corporate propaganda, 1911-1930
4. The second wave of corporate propaganda, 1936-1950
5. The case for capitalism - the third wave, to the 1980s
6. The real rulers of the world
7. The global PR industry
8. Pulling Labour's teeth
9. Blair and the business lobby
10. Cameron and the neocons
11. Conclusion : Communication and power
Notes
Index
Published by Pluto Press in Dec 2007
Paperback ISBN: 9780745326887
eBook ISBN: 9781783710737