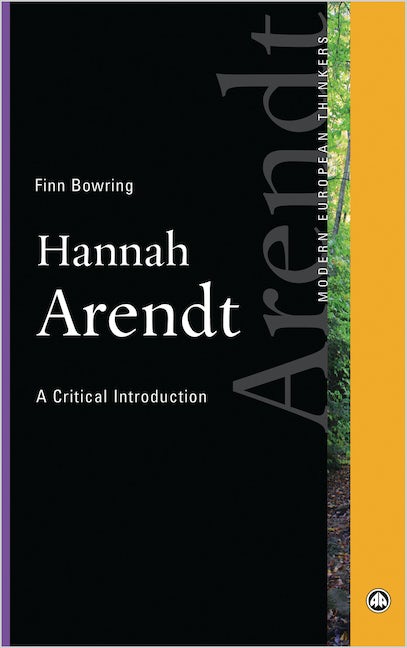 Finn Bowring shows how Arendt's writings have engaged with and influenced prominent figures in the sociological canon, and how her ideas may shed light on some of the most pressing social and political problems of today. He explores her critique of Marx, her relationship to Weber, the influence of her work on Habermas and the parallels and discrepancies between her and Foucault. This is a clearly written and scholarly text which surveys the leading debates over Arendt's work, including discussions of totalitarianism, the public sphere and the nature of political responsibility.

This book will bring new perspectives to students and lecturers in sociology and politics.

Finn Bowring is a Senior Lecturer in the School of Social Sciences, Cardiff University. He is the author of Andre Gorz and the Sartrean Legacy (Palgrave Macmillan, 2000), Science, Seeds and Cyborgs (Verso, 2003) and Hannah Arendt: A Critical Introduction (Pluto, 2011) and his writing also appeared in New Left Review, Telos, Radical Philosophy, Sociology, Capital and Class.

'An original and highly developed perspective on the influence of Arendt's thinking on the social sciences, just as scholars in a number of related disciplines are beginning to rethink the relevance of Arendt's work beyond political theory' - Dimitris Papadopoulos, Reader in Sociology and Organisation at the University of Leicester and co-author of Escape Routes (Pluto, 2008) 'An excellent, accessible and readable introduction to Arendt's political theory' - Dr Wallace McNeish, Lecturer in Sociology, University of Abertay
A Note on Referencing and Abbreviations
Introduction: Time for Action
1. The Vita Activa
2. Critique of Modernity
3. From Action to Power: The Fate of the Political
4. Marxism, Ecology and Culture
5. Feminism, the Social and the Political
6. Imperialism, Racism and Bureaucracy:
The Road to Totalitarianism
7. Totalitarianism
8. In Search of the Subject
9. The Vita Contemplativa
Conclusion: Going Astray with Arendt
Notes
References
Index
Published by Pluto Press in Aug 2011
Paperback ISBN: 9780745331416
eBook ISBN: 9781783710812