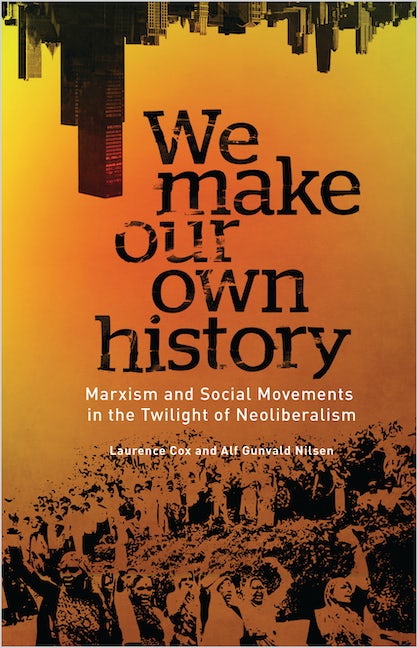 We Make Our Own History

Marxism and Social Movements in the Twilight of Neoliberalism

A rethinking of popular political movements, this book looks at new, emerging, mass visions and analyses their impact and potential in new ways.
We live in the twilight of neoliberalism: the ruling classes can no longer rule as before, and ordinary people are no longer willing to be ruled in the old way. Pursued by global elites since the 1970s, neoliberalism is defined by dispossession and ever-increasing inequality. The refusal to continue to be ruled like this - 'ya basta!' - appears in an arc of resistance stretching from rural India to the cities of the global North.

From this network of movements, new visions are emerging of a future beyond neoliberalism. We Make Our Own History responds to these visions by reclaiming Marxism as a theory born from activist experience and practice.

This book marks a break both with established social movement theory, and with those forms of Marxism which treat the practice of social movement organising as an unproblematic process. It shows how movements can develop from local conflicts to global struggles; how neoliberalism operates as a social movement from above, and how popular struggles can create new worlds from below.

'Readers will be vastly rewarded by this outstanding book and its understanding of the class struggles of social movements' - Adam David Morton, University of Sydney, Australia 'The authors refresh historical materialism and social movement theory in this imaginative, lucid book' - Ruth Wilson Gilmore, author of Golden Gulag 'A stunning read, one that every activist - and anyone concerned with the world around us - should read. Beautifully written in many places - with elegant, lucid argument, and with some great turns of phrase that open whole new windows of understanding' - Jai Sen 'A hugely important book, a must-read for those interested in movement-relevant theorising with the goal of engaging in praxis leading towards a future beyond capitalism' - Andreas Bieler, Professor of Political Economy, University of Nottingham
Preface: About This Book
1. ‘The This-Worldliness of Their Thought’: Social Movements and Theory
2. ‘History Does Nothing’: The Primacy of Praxis in Movement Theorising
3. ‘The Authors and the Actors of Their Own Drama’: A Marxist Theory of Social Movements
4. ‘The Bourgeoisie, Historically, Has Played a Most Revolutionary Part’: Social Movements from Above and Below in Historical Capitalism
5. ‘The Point Is to Change It’: Movements from Below against Neoliberalism
Notes
Bibliography
Index
Published by Pluto Press in Aug 2014
Paperback ISBN: 9780745334813
eBook ISBN: 9781783711918