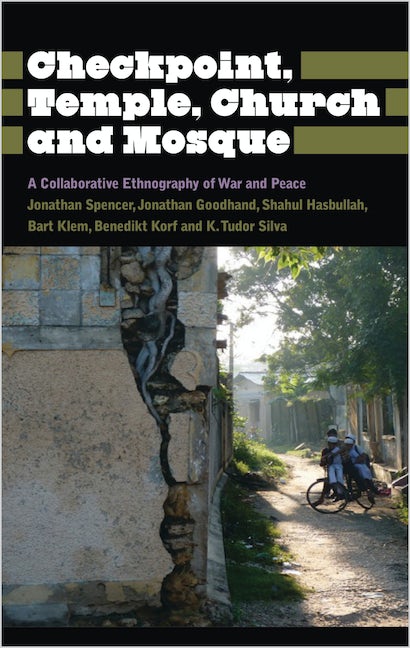 A Collaborative Ethnography of War and Peace

A study of the contradictory role of religion in Sri Lanka as a force that is both stabilising whilst also acting as a source of conflict.
Is religion best seen as only a cause of war, or is it a source of comfort for those caught up in conflict? In Checkpoint, Temple, Church and Mosque six senior figures in Anthropology, Sociology, Geography and Development Studies set out to answer this question.

Based on fieldwork conducted in Sri Lanka's most religiously diverse and politically troubled region during the country's civil war (1983-2009), it provides a series of new and provocative arguments about the promise of a religiously based civil society, and the strengths and weaknesses of religious organisations and religious leaders in conflict mediation.

The authors argue that for people trapped in long and violent conflicts, religion ultimately plays a contradictory role, and that its institutions are themselves profoundly affected by war - producing a complex picture in which Catholic priests engage with Buddhist monks and new Muslim leaders, and where Hindu temples and Pentecostal churches offer the promise of healing.

Jonathan Spencer is Regius Professor of South Asian Language, Culture and Society at the University of Edinburgh. He is the co-author of Checkpoint, Temple, Church and Mosque (Pluto, 2014).

Shahul Hasbullah is Professor of Geography at the University of Peradeniya, Sri Lanka. He is the co-author of Checkpoint, Temple, Church and Mosque (Pluto, 2014).

Bart Klem is Lecturer in Development Studies at the University of Melbourne. He is the co-author of Checkpoint, Temple, Church and Mosque (Pluto, 2014).

Benedikt Korf is Associate Professor of Geography at the University of Zurich.

Kalinga Tudor Silva is Professor of Sociology at the University of Peradeniya, Sri Lanka. He is the co-author of Checkpoint, Temple, Church and Mosque (Pluto, 2014).

'Draws together an extraordinarily rich body of ethnographic research in Sri Lanka that challenges conventional wisdoms about religion and conflict. Exquisitely written and subtly argued this book is essential reading for practitioners and researchers engaged in the fields of development, conflict and religion' - Jude Howell, Professor of International Development, London School of Economics

'The substantive contributions of this book to our understanding of the intertwined life of war and peace are unparalleled and what is even more remarkable is their mode of thinking that privileges co-operative modes of work. An inspiring and deeply moving book'