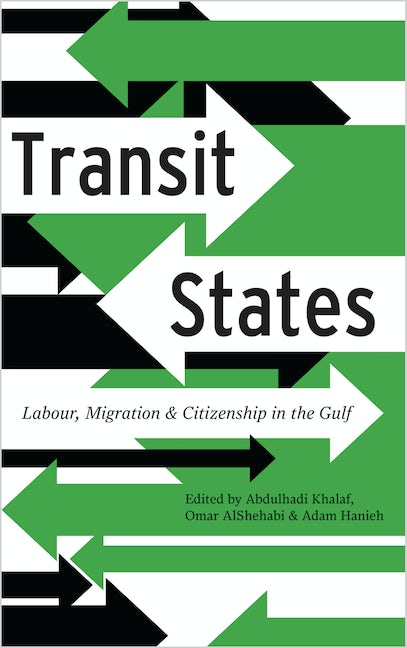 Labour, Migration and Citizenship in the Gulf

The exploitation of migrant workers in the Gulf is explored in this accessible yet in-depth analysis by scholars from the region.
There are vast swathes of people in economic migration across the Gulf states today. In total, Saudi Arabia, Kuwait, Bahrain, United Arab Emirates, Oman and Qatar form the largest destination for labour migration in the global South. This book studies the impact of this mass migration, and its effect on citizenship and workers' rights.

Transit States considers how the transitory labour power these workers provide creates an extraordinary development boom that impacts neighbouring countries. The majority of the working population is therefore composed of migrant workers with no citizenship rights.

The Gulf takes a central place in growing debates around migration and labour in the global economy. Transit States confronts the precarious working conditions of migrants in an accessible, yet in-depth manner.

Abdulhadi Khalaf is a senior lecturer in the Sociology department at Lund University. He is the co-editor of Transit States: Labour, Migration and Citizenship in the Gulf (Pluto, 2014).

Omar AlShehabi writes from Bahrain and is director of the Gulf Centre for Development Policies. He is the co-editor of Transit States: Labour, Migration and Citizenship in the Gulf (Pluto, 2014). He has previously worked at the World Bank and the IMF as well as McKinsey & Co.

Adam Hanieh is Senior Lecturer in Development Studies at the School of Oriental and African Studies, University of London. He is editor of Transit States (Pluto, 2014), author of Capitalism and Class in the Gulf Arab States (2011) and Lineages of Revolt: Issues of Contemporary Capitalism in the Middle East (2013).