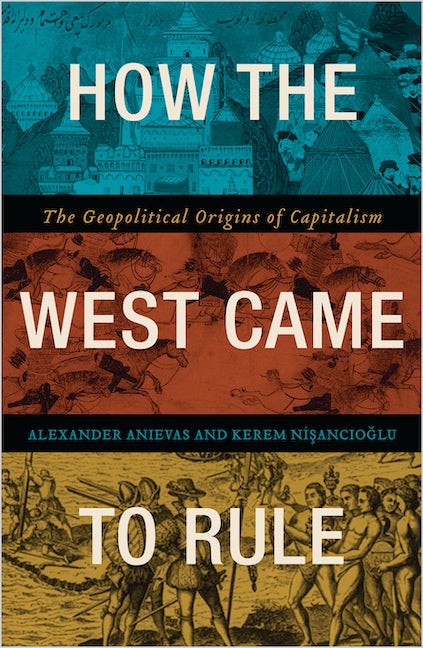 How the West Came to Rule

A non-Eurocentric, sweeping look at the material conditions and events that created capitalism

Mainstream historical accounts of the development of capitalism describe a process which is fundamentally European - a system that was born in the mills and factories of England or under the guillotines of the French Revolution. In this groundbreaking book, a very different story is told.

How the West Came to Rule offers a interdisciplinary and international historical account of the origins of capitalism. It argues that contrary to the dominant wisdom, capitalism's origins should not be understood as a development confined to the geographically and culturally sealed borders of Europe, but the outcome of a wider array of global processes in which non-European societies played a decisive role.

Through an outline of the uneven histories of Mongolian expansion, New World discoveries, Ottoman-Habsburg rivalry, the development of the Asian colonies and bourgeois revolutions, Alexander Anievas and Kerem Nisancioglu provide an account of how these diverse events and processes came together to produce capitalism.

'A fundamental rethinking of the origins of capitalism and the emergence of Western domination by the interactive relations with the non-European world. Highly Recommended.' - CHOICE

'This rigorously argued book presents a compelling challenge to standard narratives of capitalist modernity. The authors combine theoretical sophistication and a wide-ranging account of extra-European histories to provide a superb - and provocative - alternative' - Gurminder K Bhambra, author of Connected Sociologies​

'A superb account which successfully transcends a false dichotomy. Drawing on the best aspects of Historical Sociology and International Relations, and within a rigorous Marxist framework, the authors offer a challenge to all existing explanations of the rise of the West to world dominance' - Neil Davidson, author of How Revolutionary Were the Bourgeois Revolutions?

'There is much talk these days of Big History, yet the advocates invariably stop short of talking about capitalism. With their bold and wide-ranging treatment, Anievas and Ni&#351;&#287;w place the origins of capitalism at the very centre of the agenda' - Geoff Eley, Karl Pohrt Distinguished University Professor of Contemporary History at the University of Michigan

'Provocative and brilliant ... An enormous contribution to redressing the one-sided debates about the origins of capitalism and the West's conquest of the planet ... Their book should be read by anyone hoping to understand as well as challenge Eurocentrism, imperialism, and the capitalist system as a whole' - International Socialist Review

List of Figures
Acknowledgements
Introduction
1. The Transition Debate: Theories and Critique
2. Rethinking the Origins of Capitalism: The Theory of Uneven and Combined Development
3. The Long Thirteenth Century: Structural Crisis, Conjunctural Catastrophe
4. The Ottoman-Habsburg Rivalry over the Long Sixteenth Century
5. The Atlantic Sources of European Capitalism, Territorial Sovereignty and the Modern Self
6. The ‘Classical’ Bourgeois Revolutions in the History of Uneven and Combined Development
7. Combined Encounters: Dutch Colonisation in South-East Asia and the Contradictions of ‘Free Labour’
8. Origins of the Great Divergence over the Longue Durée: Rethinking the ‘Rise of the West’
Conclusion
Notes
Index
Published by Pluto Press in Jun 2015
Paperback ISBN: 9780745336152
eBook ISBN: 9781783713240