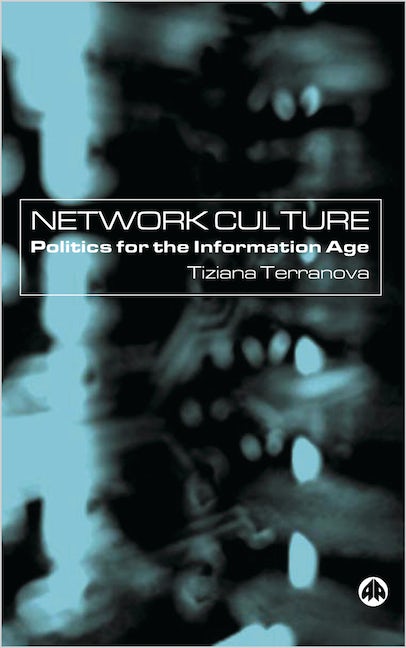 Politics For the Information Age

A sophisticated argument about how the internet and communication networks impact on politics, democracy, and identity.
In an age of email lists and discussion groups, e-zines and weblogs, bringing together users, consumers, workers and activists from around the globe, what kinds of political subjectivity are emerging? What kinds of politics become possible in a time of information overload and media saturation? What structures of power and control operate over a self-organising system like the internet?
In this highly original new work, Tiziana Terranova investigates the political dimension of the network culture in which we now live, and explores what the new forms of communication and organisation might mean for our understanding of power and politics. Terranova engages with key concepts and debates in cultural theory and cultural politics, using examples from media culture, computing, network dynamics, and internet activism within the anti-capitalist and anti-war movements.
Network Culture concludes that the nonlinear network dynamics that link different modes of communication at different levels (from local radio to satellite television, from the national press to the internet, from broadcasting to rumours and conspiracy theories) provide the conditions within which another politics can emerge. This other politics, the book suggests, does not entail the production of a new political discourse or ideology, but the invention of micropolitical tactics able to stand up to new forms of social control.

Tiziana Terranova teaches the sociology of media and culture in the Department of Sociology at the University of Essex. She has published various pamphlets and essays on digital cultures, in Italian and English.

'Brings to questions of network culture and politics both a keen philosophical perspective and a deep understanding of the history and technology of information networks. She shows in wonderfully clear terms how our increasingly networked world brings harsher forms of domination but also opens the possibility for new struggles of liberation' - Michael Hardt, co-author (with Antonio Negri) of Empire 'A genuine achievement. Terranova gives the reader a notion of new media that extends all the way to artificial life. Then she takes this concoction and makes it political. Required reading for media theorists, evolutionary biology junkies and activists' - Scott Lash, Director of the Centre for Cultural Studies, Goldsmiths College, University of London
Acknowledgments
Introduction
1. Three Propositions On Informational Cultures
2. Open Networks
3. Free Labour
4. Soft Control
5. Communications’ Biopower
Bibliography
Index
Published by Pluto Press in Jun 2004
Paperback ISBN: 9780745317489
eBook ISBN: 9781783714421