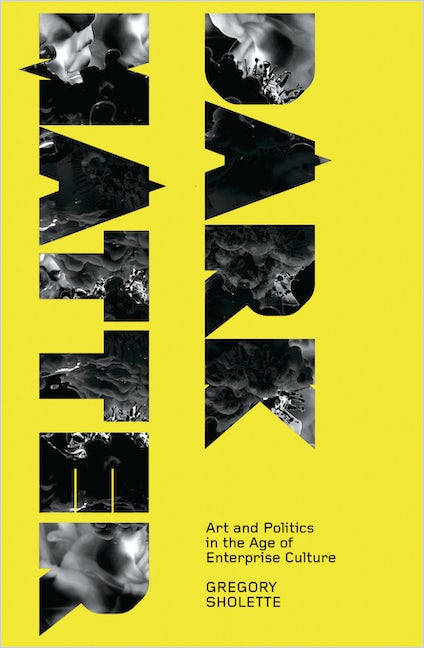 Art and Politics in the Age of Enterprise Culture

Shows that the elite of the art world are sustained by new forms and styles created by artists outside the mainstream.
Art is big business, with some artists able to command huge sums of money for their works, while the vast majority are ignored or dismissed by critics. This book shows that these marginalised artists, the 'dark matter' of the art world, are essential to the survival of the mainstream and that they frequently organize in opposition to it.

Gregory Sholette, a politically engaged artist, argues that imagination and creativity in the art world originate thrive in the non-commercial sector shut off from prestigious galleries and champagne receptions. This broader creative culture feeds the mainstream with new forms and styles that can be commodified and used to sustain the few artists admitted into the elite.

This dependency, and the advent of inexpensive communication, audio and video technology, has allowed this 'dark matter' of the alternative art world to increasingly subvert the mainstream and intervene politically as both new and old forms of non-capitalist, public art. This book is essential for anyone interested in interventionist art, collectivism, and the political economy of the art world.

'With great verve and urgency, Gregory Sholette explores the economics of contemporary art production in an era of neoliberalism, and outlines the promises and pitfalls of various tactics of resistance. Dark Matter is a salient call-to-arms to all cultural labourers.' - Julia Bryan-Wilson, author of Art Workers: Radical Practice in the Vietnam War Era 'The ultimate companion to contemporary activist art. In his exquisite and theoretically informed style Gregory Sholette investigates the problematic functions of art practices in the processes of neoliberal appropriation, but above all the wild, explosive and deterritorialising lines that are drawn in the dark matter between art and politics' - Gerald Raunig is a philosopher and art theorist who lives in Vienna, Austria. He is the author of Art and Revolution 'Masterfully illuminates the configurations, ideas, and behaviours of collectives dedicated to cultural resistance. Dark Matter is essential reading for anyone concerned with the fate of the avant-garde and the emergence of new possibilities in cultural production that suggest and create alternatives to global capitalism' - Critical Art Ensemble 'As both active participant and witness Greg Sholette sheds a welcome and overdue light on the dark matter of the so-called art world' - Hans Haacke, artist 'Focusing primarily on the anti-institutional, collective and politically critical artists that often willingly reject the light of the mainstream galleries and academies, Sholette both highlights a vast array of important contributors to art of the last decade and also challenges the ahistorical assumptions that ground the capitalist art market.' - Paul B. Jaskot, Professor of Art History at DePaul University 'An important and necessary intervention. Dark Matter is well placed to shift the debate on art's utility back within the domain of labour and value, where it has long been missing' - Professor John Roberts, University of Wolverhampton
Exordium: An Accidental Remainder
Introduction: The Missing Mass
1. Art, Politics, Dark Matter: Nine Prologues
2. The Grin of the Archive
3. History That Disturbs the Present
4. Temporary Services
6. The Unnamable
7. Mockstitutions
8. Conclusions: Nights of Amateurs
Notes
Bibliography
Appendix: Artists’ Groups Survey 2008
Index
Published by Pluto Press in Nov 2010
Paperback ISBN: 9780745327525
eBook ISBN: 9781783714469