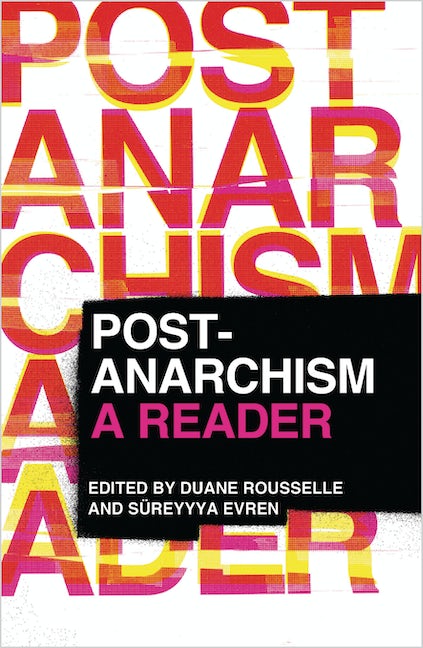 The essential reader on Post-Anarchism, a movement blending traditional anarchist ideas with post-structuralist and post-modernist thought.
Post-anarchism has been of considerable importance in the discussions of radical intellectuals across the globe in the last decade. In its most popular form, it demonstrates a desire to blend the most promising aspects of traditional anarchist theory with developments in post-structuralist and post-modernist thought. Post-Anarchism: A Reader includes the most comprehensive collection of essays about this emergent body of thought, making it an essential and accessible resource for academics, intellectuals, activists and anarchists interested in radical philosophy.

Many of the chapters have been formative to the development of a distinctly 'post-anarchist' approach to politics, aesthetics, and philosophy. Others respond to the so-called 'post-anarchist turn' with caution and scepticism. The book also includes original contributions from several of today's 'post-anarchists', inviting further debate and new ways of conceiving post-anarchism across a number of disciplines.

Duane Rousselle is the founder and editor of the journal Anarchist Developments in Cultural Studies and a librarian for 'The Anarchist Library' project. He is co-editor of Post-Anarchism: A Reader (Pluto, 2011).

Süreyyya Evren writes on contemporary art, literature and radical politics. He is the editor-in-chief and founder of the post-anarchist magazine Siyahi and the co-editor of Post-Anarchism (Pluto, 2011).

'Collects together key readings in post-anarchist theory and highlights the complexity and diversity of this current of thought. Acknowledging the critical attention post-anarchism has received, it provides an excellent guide to the central themes of contemporary debate. A marvellous, valuable book' - Ruth Kinna, Senior Lecturer in Politics at Loughborough University. Editor of Anarchist Studies and author of The Beginner's Guide to Anarchism (2009). 'I would expect readers at all academic levels, from undergraduates and/or street activists right up to the highest levels of academia, to find this work intellectually stimulating, exciting and fresh' - Stevphen Shukaitis, University of Essex
Preface by Duane Rousselle
Acknowledgements
Introduction by Süreyyya Evren
PART 1: When Anarchism Met Post-structuralism
1. Post-structuralism and the Epistemological Basis of Anarchism by Andrew Koch
2. Is Post-structuralist Political Theory Anarchist? by Todd May
3. The Politics of Post-anarchism by Saul Newman
4. Post-anarchism Anarchy by Hakim Bey
PART 2: Post-anarchism Hits the Streets
5. Empowering Anarchy: Power, Hegemony, and Anarchist Strategy by Tadzio Mueller
6. Hegemony, Affinity, and the Newest Social Movements at the End of the 00s by Richard J. F. Day
7. The Constellation of Opposition by Jason Adams
8. [email protected]/1989: Reflections on Postmodern Revolutions by Antón Fernendez de Rota
PART 3: Classical Anarchism Reloaded
9. Things to do with Post-structuralism in a Life of Anarchy: Relocating the Outpost of Post-anarchism by Sandra Jeppesen
10. Anarchy, Power and Post-structuralism by Alan Antliff
11. Post-anarchism: A Partial Account by Benjamin Franks
PART 4: Lines of Flight
12. Buffy the Post-anarchist/Vampire Slayer by Lewis Call
13. Sexuality as State-Form by Jamie Heckert
14. When Theories Meet: Emma Goldman and 'Post-anarchism' by Hilton Bertalan
15. Reconsidering Post-structuralism and Anarchism by Nathan Jun
16. A Post-anarchist Politics of Technology by Michael Truscello
Notes on Contributors
Index
Published by Pluto Press in Feb 2011
Paperback ISBN: 9780745330860
eBook ISBN: 9781783714568