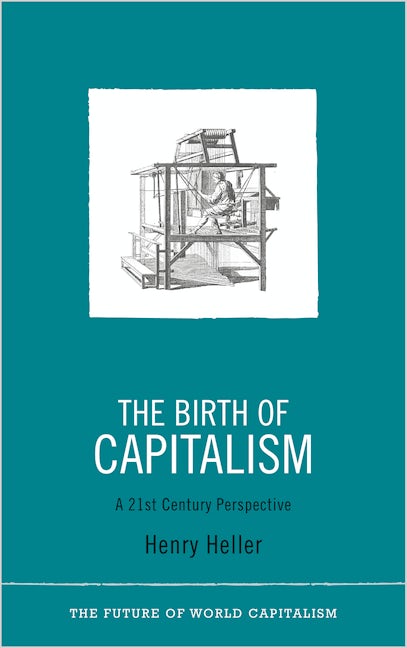 The Birth of Capitalism

Focusing on arguments about the origin, nature and sustainability of capitalism, Heller offers a new reading of the historical evidence and a critical interrogation of the transition debate. He advances the idea that capitalism must be understood as a political as well as an economic entity. This book breathes new life into the scholarship, taking issue with the excessively economistic approach of Robert Brenner, which has gained increasing support over the last ten years. It concludes that the future of capitalism is more threatened than ever before.

The new insights in this book make it essential reading for engaged students and scholars of political economy and history.

Henry Heller is a Professor of History at the University of Manitoba, Canada. He is the author of The Capitalist University (Pluto, 2016), The Birth of Capitalism: A 21st Century Perspective (Pluto, 2011) The Cold War and the New Imperialism: A Global History, 1945-2005 (Monthly Review Press, 2006) and The Bourgeois Revolution in France (Berghahn, 2006).

'Sets a new standard in the study of the transition from feudalism to capitalism. A must for anybody interested in the transition debates' - Michael Perelman, author of The Invention of Capitalism: Classical Political Economy and the Secret History of Primitive Accumulation 'A comprehensive, critical but balanced account from a classical Marxist perspective of the entire debate and its various controversies' - Neil Davidson 'While many fantasise about an 'Empire' unified on a planetarylevel, this is a brilliant analysis of the role of national states inthe forming and functioning of capitalism' - Domenico Losurdo, University of Urbino, author of Liberalism: A Counter-History
Preface and acknowledgements
Introduction: problems and methods
1. The Decline of feudalism
2. Experiments in capitalism: Italy, Germany, France
3. English capitalism
4. Bourgeois revolution
5. Political capitalism
6. The Industrial Revolution: Marxist perspectives
7. Capitalism and world history
Conclusion
Notes
Bibliography
Index
Published by Pluto Press in Aug 2011
Paperback ISBN: 9780745329598
eBook ISBN: 9781783714605