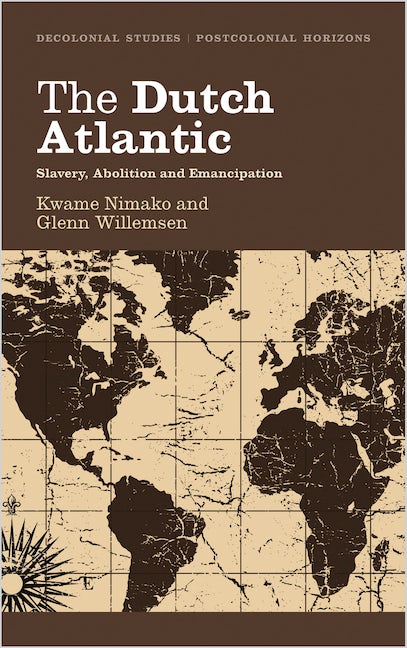 This story of Dutch involvement in Atlantic slavery

This book interrogates the Dutch involvement in Atlantic slavery and assesses the historical consequences of this for contemporary European society.

Kwame Nimako and Glenn Willemsen show how the slave trade and slavery intertwined economic, social and cultural elements, including nation-state formation in the Netherlands and across Europe. They explore the mobilisation of European populations in the implementation of policies that facilitated Atlantic slavery and examine how European countries created and expanded laws that perpetuated colonisation.

Addressing key themes such as the incorporation of the formerly enslaved into post-slavery states and contemporary collective efforts to forget and/or remember slavery and its legacy in the Netherlands, this is an essential text for students of European history and postcolonial studies.

Kwame Nimako teaches International Relations at the Graduate School of Social Sciences, University of Amsterdam. He is the co-author of The Dutch Atlantic (Pluto, 2011).

'A fundamental addition to a distinguished genealogy of work - from Ottobah Cugoano to Eric Williams and Jean Casimir - a genealogy in which scholarship and experientia Africana meet' - Walter Mignolo, William H Wannamaker Distinguished Professor in Literature and Romance Studies at Duke University

'This erudite history of Dutch slavery, revolts, abolition efforts, and emancipation is told from the underside of Dutch life. ... [It is] a breathtaking portrait of an uncomfortable history, an agonising story to be told and never forgotten' - Lewis R. Gordon, Laura H. Carnell Professor of Philosophy and Jewish Studies and Founding Director of the Institute for the Study of Race and Social Thought and the Center for Afro-Jewish Studies at Temple University

Acknowledgements
Foreword
Stephen Small, UC Berkeley
Preface
Artwell Cain, NiNsee
1. Introduction, Goals and Issues
Introduction and Goals
Context and Concepts
Importance and Relevance
Overview of Chapters
2. Transatlantic Slavery and the Rise of the European
World Order
The Age of Banditry (1492–1648)
Sovereignty and Chattel Slavery (1648–1789)
Citizenship, Slavery and the ‘Free Soil Ideology’
Science and Chattel Slavery
3. Chattel Slavery, Sugar and Salt
Slavery and the Making of Global Economy
Slavery and Sugar
Sugar and Suriname
Pacification and Resistance
4. Abolition without Emancipation
European and Systemic Context
From Regulation to Intervention
Modalities of Abolition: Progressive Control versus
Transformative Change
Abolition and Citizenship
5. Trajectories of Emancipation: Religion, Class,
Gender and Race
Religion and Emancipation
Class and Emancipation
viii The Dutch Atlantic
Gender and Emancipation
Race and Emancipation
The Immediate Aftermath of Abolition
6. The Legacy of Slavery: The Unfinished Business of
Emancipation
Memory and Dignitarianism
Commemorators and Commemoration
Integration and Multiculturalism
NiNsee as a Contested Project
Museums and Galleries
Reparations
Anniversaries and Apologies
7. Conclusion: Parallel Histories and Intertwined
Belonging
Some Conclusions
A Final Note
Bibliography
Index
Published by Pluto Press in Sep 2011
Paperback ISBN: 9780745331072
eBook ISBN: 9781783714834