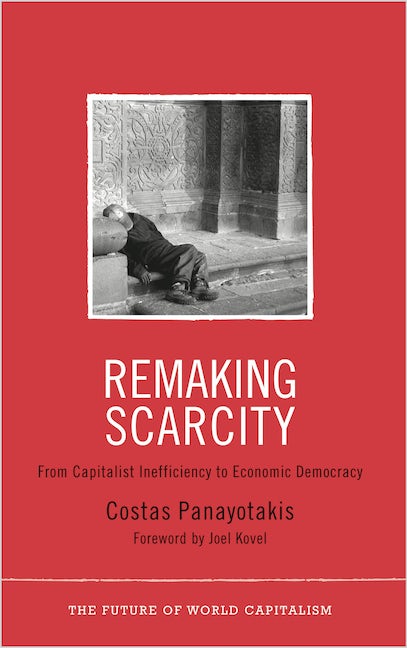 From Capitalist Inefficiency to Economic Democracy

A powerful challenge to the neoliberal orthodoxy
The dominant schools of neoclassical and neoliberal economics tell us that material scarcity is an inevitable product of an insatiable human nature. Against this, Costas Panayotakis argues that scarcity is in fact a result of the social and economic processes of the capitalist system.

The overriding importance of the logic of capital accumulation accounts for the fact that capitalism is not able to make a rational use of scarce resources and the productive potential at the disposal of human society. Instead, capitalism produces grotesque inequalities and unnecessary human suffering, a toxic consumerist culture that fails to satisfy, and a deepening ecological crisis.

Remaking Scarcity is a powerful challenge to the current economic orthodoxy. It asserts the core principle of economic democracy, that all human beings should have an equal say over the priorities of the economic system, as the ultimate solution to scarcity and ecological crisis.

Costas Panayotakis is Professor of Latin at the University of Glasgow. He is the Book Review editor of the international journal Capitalism Nature Socialism and the author of Remaking Scarcity (Pluto, 2011).

'Combines theoretical boldness and the determination to extend Marxian theory. It deserves to be read as another impressive product of the global rethinkings of Marxism now engaged in building a Marxism for the twenty-first century' - Richard D. Wolff, Professor of Economics Emeritus, University of Massachusetts, Amherst 'An extremely scholarly, insightful and well-argued contribution - with ecology and feminism given the attention often denied them - to this crucially important literature. Highly Recommended' - Bertell Ollman, Department of Politics, New York University, author of Dance of the Dialectic: Steps in Marx's Method 'Extremely timely ... Panayotakis develops a critical approach to an issue that is central to neo-classical economics but rarely the subject of critical analysis' - Molly Scott Cato, Reader in Green Economics, Cardiff University 'An excellent contribution to attempts to think beyond the current crisis of capitalism' - Dr Benjamin Selwyn, Senior Lecturer in International Relations, University of Sussex 'This is a fine book, full of thoughtful considerations on the most pressing issues facing us' - Ted Benton, Environmental Ethics
Foreword by Joel Kovel
Preface
1. Capitalism, Scarcity and Economic Democracy
2. The Neoclassical Approach to Scarcity
3. Scarcity and Capital Accumulation
4. Scarcity, Capitalist Exploitation, and Consumption
5. Economic Democracy and the Multiplicity of Social Inequalities and Struggles
6. Capitalism, Scarcity and Global Inequalities
7. Scarcity and the Deepening Ecological Crisis
8. Imagining Economic Democracy: Two Models
9. The Way Forward: Economic Democratization as a Strategy of Reforms and Fundamental Social Change
Conclusion
Humorous Appendix: Austerity Nut and His Message
Notes
Bibliography
Index
Published by Pluto Press in Sep 2011
eBook ISBN: 9781783714971