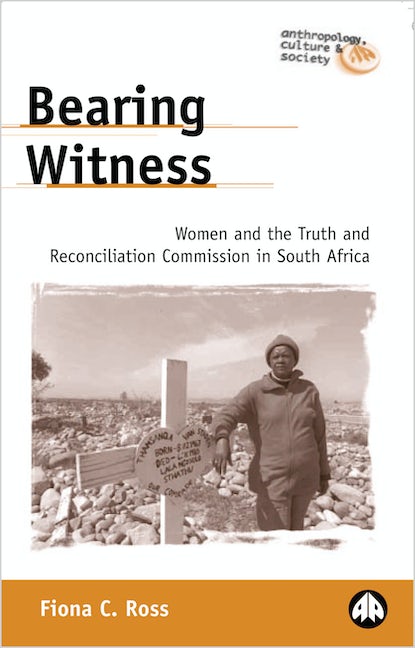 Women and the Truth and Reconciliation Commission in South Africa

A subtle understanding of the achievements and the limitations of testimony
People who witness acts of terror and violence are often called after the event to bear witness to what they saw. In cases where this violence is inflicted by the state upon its own people, the process of bearing witness is both politically complex and traumatic for the individual involved. Independent trials and commissions have become important mechanisms through which the truth of past violence is sought in democratising states, but to date there has been little close attention to the processes and complexity of the work of such institutions.

Fiona Ross's fascinating study of the process of bearing witness is the first book to examine the gendered dimensions of this topic from an anthropological and ethnographic viewpoint. Taking as a key example the Truth and Reconciliation Commission in South Africa, Ross explores women's relationships to testimony, particularly the extent to which women avoid talking about or are silent about certain forms of violence and suffering.

Offering a wealth of first hand examples, Ross approaches a more subtle understanding of the achievements and the limitations of testimony as a measure of suffering and recovery generally. Is it, she asks, the panacea it is usually seen as? Or do conventional discourses on human rights, suffering and reconciliation oversimplify an altogether more complex and problematic process?