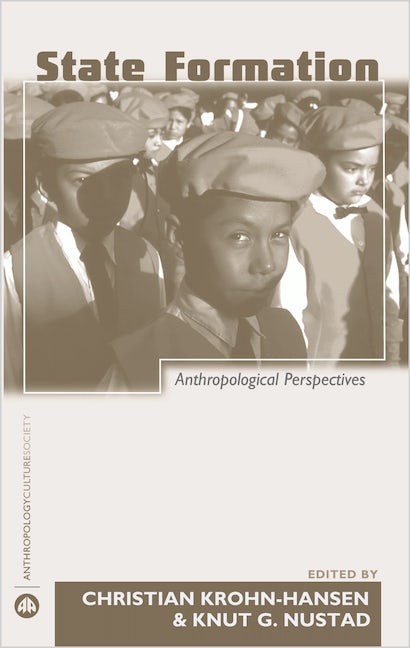 The contributors argue that the state is not a fixed and definite object. Our perceptions of it are constantly changing, and differ from person to person. What is your idea of the state if you are a refugee? Or if you are living in post-aparteid South Africa? Our perceptions are formed and sustained by evolving discourses and techniques -- these come from institutions such as government, but are also made by communities and individuals.

The contributors examine how state structures are viewed from the inside, by official state bodies, composed of bureaucrats and politicians; and how these state manifestations are supported, reproduced or transformed at a local level. An outline of theoretical approaches is followed by nine case studies ranging from South Africa to Peru to Norway.

With a good range of contributors including Cris Shore, Clifton Crais, Ana Alonso and Bruce Kapferer, this is a comprehensive critical analysis of anthropological approaches to the study of state formation.

Christian Krohn-Hansen is Professor of Anthropology at the University of Oslo. His research interests include the anthropology of politics and economic anthropology. He is the co-editor of State Formation (Pluto, 2005).

Knut Gunnar Nustad is Associate Professor in the Department of International Environment and Development Studies at the Norwegian University of Life Sciences. He is the co-editor of State Formation (Pluto, 2005).

'A novel approach to the state, seeing it both from above and below' - Thomas Hylland Eriksen 'Fascinating material, a kind of anthropology of state formation which supplements and broadens what social historians have been writing about states and state formation' - Professor Richard A. Wilson, University of Connecticut
Foreword by Bruce Kapferer
Preface
PART I. THEORETICAL APPROACHES
1. Introduction by Christian Krohn-Hansen and Knut G. Nustad
2. Sovereignty, the Spatial Politics of Security, and Gender: Looking North and South from the US-Mexico Border, by Ana M. Alonso
PART II. A VIEW FROM COMMUNITIES
3. Chiefs and Bureaucrats in the Making of Empire: A Drama from the Transkei, South Africa, October 1880, by Clifton Crais
4. State Formation through Development in Post-apartheid South Africa, by Knut G. Nustad
5. Negotiated Dictatorship: The Building of the Trujillo State in the Southwestern Dominican Republic, by Christian Krohn-Hansen
6. The Materiality of State Effects: An Ethnography of a Road in the Peruvian Andes, by Penelope Harvey
7. Contradictory Notions of the State: Returned Refugees in Guatemala, by Kristi Anne Stølen
PART III: A VIEW FROM STATE BODIES
8. Counting on State Subjects: State Formation and Citizenship in Twentieth-Century
Mexico, by Helga Baitenmannpg
9. ‘A Speech that the Entire Ministry may Stand for’: On Generating State Voice, by Iver B. Neumann
10. ‘Better Safe than Sorry’: Legislating Assisted Conception in Norway, by Marit Melhuus
11. The State of the State in Europe, or, ‘What is the European Union that Anthropologists Should be Mindful of it’?, by Cris Shore
Contributors
Index
Published by Pluto Press in Sep 2005
Paperback ISBN: 9780745324418
eBook ISBN: 9781783715350