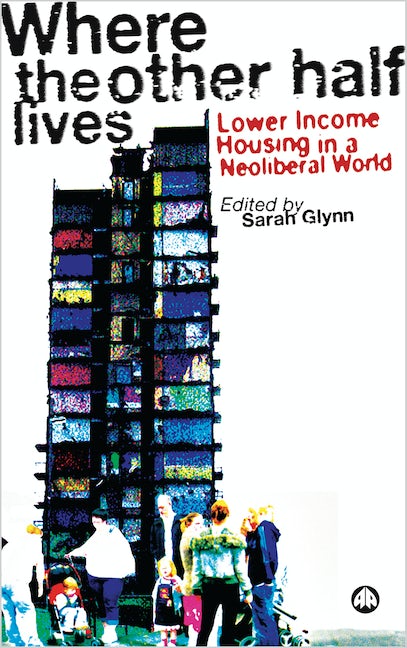 Where the Other Half Lives

Home is where the profit is
Housing has become a hot topic. The media is filled with stories of individual housing hardship and of major property-related financial crises: of crippling personal debts, rundown social housing, homelessness, mass demolition, spiralling prices, unaffordability and global recession.

This book links all of these through a radical analysis that puts housing at the heart of critical economic and political debate. The authors show that these problems arise from the fact that houses are no longer seen primarily as homes for living in, but rather as a source of profit.

Case studies from the UK, the US and other western countries are set into a overview of how housing has changed over the last few decades. The book also examines campaigns for better housing and explores possibilities for a different approach to this most fundamental of human needs.

Sarah Glynn is a social and political geographer working at the University of Edinburgh. She is interested in housing, social exclusion and multiculturalism and the editor of Where the Other Half Lives (Pluto, 2009).

'To feel secure people need good well maintained housing, where they know they can live without fear of having to leave. Our society has consistently failed to provide this. We are told the market will be the answer, but it isn't. This book will explain why, and point the way to a socially responsible economy' - Ken Loach 'This book is a brilliant, compulsive and passionately written case for the continued importance of council housing' - Mute Magazine 'At last, a cross-national treatment - theoretical as well as empirical - of how neoliberalism has impacted housing policies and programs, and their effects on us all' - Chester Hartman, Director of Research at the Poverty & Race Research Action Council in Washington, DC and Adjunct Professor of Sociology at George Washington University. 'Provides a concise introduction to and a trenchant and impassioned critique of four decades of neoliberal housing policy; it challenges many of the invidious shibboleths of present-day development programmes, and begins the debate about alternatives based on the principles of equity and social justice' - Professor Joe Doherty, Centre for Housing Research, University of St Andrews 'Forcing councils to privatise and failing both to build social housing on a big scale or regenerate the estates has been the worst failure of our Labour government. Sarah Glynn and her contributors demonstrate the neoliberal legacy behind this and show the damage it inflicted on society' - Austin Mitchell MP, Chair of the House of Commons Council Housing Group This book demonstrates how neo-liberal policy makers have presented cities with a 'false choice' between degeneration .... It criticises the short-sightedness of policies of state-sponsored gentrification and the structural inequalities ... This is a very readable and robust account of recent urban policy and its critical edge will no doubt challenge and enlighten its readers. - Professor Loretta Lees, Department of Geography in the School of Science and Public Policy, King's College London.
Preface and Acknowledgements
Introduction
Part I - Housing and Neoliberalism
1. If public housing didn't exist we'd have to invent it
2. Neoliberalism's Home Front
3. Regeneration as a wooden horse
Part II - Case Studies: real lives and real estate
4. From Popular Capitalism to Third Way Modernisation: the example of Leeds, England Stuart Hodkinson
5. Getting rid of the ugly bits: the myth and reality of regeneration in Dundee, Scotland - Sarah Glynn
6. The Politics Of Housing Under France's New Right - Corinne Nativel
7. Circumventing Circumscribed Neoliberalism: The 'system switch' in Swedish housing Eric Clark & Karin Johnson
8. Market Rules: Neo-liberal Housing Policy in New Zealand - Laurence Murphy
9. Going once, going twice: a short history of public housing in Australia - Peter Phibbs and Peter Young
10. Destroyed by HOPE: Public housing, neoliberalism, and progressive housing activism in the US - Jason Hackworth
11. Political marginalization, misguided nationalism and the destruction of Canada's social housing systems - Jason Hackworth
Part III - The Way Forward: strategy and tactics
12. Fighting Back: lessons from 100 years of housing campaigns
13. Homes for Today and Tomorrow
About the authors
Index
Published by Pluto Press in May 2009
eBook ISBN: 9781783715497