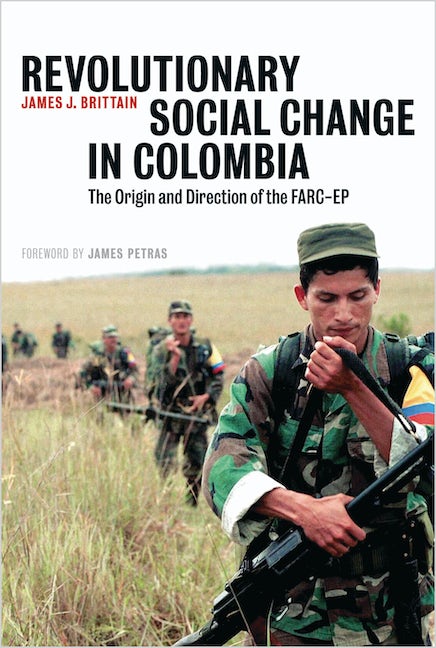 The Origin and Direction of the FARC-EP

An insider's account of Colombia's guerrilla war
Although they are one of the most powerful military forces in Latin American history, little is known about the Revolutionary Armed Forces of Colombia-People's Army (FARC-EP). This book explains why this political military movement came into existence and assesses whether the methods employed by the insurgency have the potential to free those marginalised in Colombia.

By evaluating the FARC-EP's actions, ideological construction, and their theoretical placement, the book gauges how this guerrilla movement relates to revolutionary theory and practice and through what tangible mechanisms, if any, they are creating a new Colombia.

James J. Brittain is an Assistant Professor of Sociology at Acadia University. He is also the co-founder of the Atlantic Canada-Colombia Research Group. James' primary research and teaching interests include the praxis of social change in Latin America, the relevance of classical social theory in contemporary geopolitics. He is the author of Revolutionary Social Change in Colombia (Pluto, 2009).

'A theoretically and empirically rich analysis of the insurgency and its historical origins' - Dr Doug Stokes, Senior Lecturer in International Relations, University of Kent, Canterbury, UK. 'A valuable study of the causes, meaning and significance of the armed insurgency in Colombia. It [presents] a welcome break from the hegemony of the apolitical discourses that have dominated the scholarship on Colombia's conflict' - Nazih Richani, Director of Latin American Studies at Kean University, and Associate Professor of Political Science. 'Based on extensive first-hand research in guerrilla-controlled regions, Brittain chronicles the origins, development and achievements of Colombia's FARC-EP while dispelling many of the myths surrounding the rebel group' - Terry Gibbs is an Associate Professor of Political Science and the Director of the Centre for International Studies at Cape Breton University in Nova Scotia, Canada.
Dedication
Acknowledgements
Prologue
List of Diagrams, Graphs, Maps, and Tables
List of Acronyms
Preface
1. An Overview of the Revolutionary Armed Forces of Colombia-People's Army (FARC-EP): A History of Radicalism in the Countryside
2. Ejército del Pueblo: A Sociological Analysis of Radical Social Change
3. Theorizing Revolution: The Importance of Colombia
4. Colombia's Rural Political Economy in Historical and Contemporary Perspective
5. The Political Economy of Coca in Colombia, Past and Present
6. Dominant Class Reactionism: Far-Right Politics and Paramilitarism
7. The FARC-EP's Relation to (Pre)Revolutionary Social Change
8. Prospects for the Future: From 'Dual Power' to Taking Power
Bibliography
Index
Published by Pluto Press in Dec 2009
Paperback ISBN: 9780745328751
eBook ISBN: 9781783715992