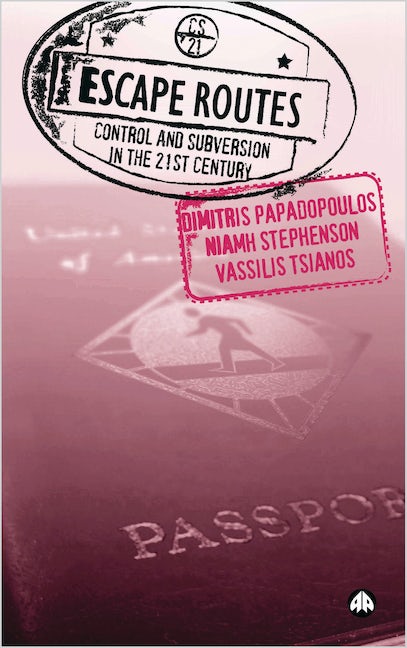 Control and Subversion in the Twenty-First Century

Shows how we can resist increasingly advanced methods of state control by refusing to conform to accepted behavioural norms.
Illegal migrants who evade detection, creators of value in insecure and precarious working conditions and those who refuse the constraints of sexual and biomedical classifications: these are the people who manage to subvert power and to craft unexpected sociabilities and experiences. Escape Routes shows how people can escape control and create social change by becoming imperceptible to the political system of Global North Atlantic societies.

'A profound and brilliant examination of the power of exodus to create radical interventions in perhaps the three most important and contested fields of society today: life, migration and precarious labour. It is in these fields that the present and future of multitude is at stake. Escape Routes is a toolbox in the hands of multitude.'
Antonio Negri, author of Insurgencies and co-author of Empire and Multitude

Dimitris Papadopoulos is Reader in Sociology and Organisation at the University of Leicester, UK. He is co-editor of the journal Subjectivity and co-author of Escape Routes (Pluto, 2008).

Niamh Stephenson is Senior Lecturer in Social Science at the School of Public Health and Community Medicine at the University of South Wales, Sydney. She is the co-author of Escape Routes (Pluto, 2008) and Analysing Everyday Experience: Social Research and Political Change (2006).

Vassilis Tsianos is Professor of Social Sciences at the University of Hamburg, Germany. He is co-author of Escape Routes (Pluto, 2008) and co-editor of Empire and the Biopolitical Turn (2007) and Turbulent Margins: New Perspectives of Migration in Europe (2007).

'A profound and brilliant examination of the power of exodus to create radical interventions in perhaps the three most important and contested fields of society today: life, migration and precarious labour' - Antonio Negri, author of Insurgencies: Constituent Power and the Modern State (1999), and co-author of Empire (2000) and Multitude (2005). Another world is here! So announce the authors in their preface to a stirring and intellectually inspiring book about the possibility, the necessity and the potency of escape. ... The authors trace escape routes through the ordinary and through everyday practices. Escape Routes is required reading for anyone who believes in the alternative worlds produced alongside neoliberal capitalism. - Judith Halberstam, Professor of English and Gender Studies at the University of Southern California and author of In a Queer Time and Place: Transgender Bodies, Subcultural Lives and Female Masculinity (2005). A rich variety of work starts with some version of the autonomous thesis, that the everyday actions or resistances of people precede power ... Escape Routes is one of the most original and interesting efforts to build a fuller understanding of the contemporary world, by focussing on processes and mapping out some of the history of modern power and resistance. - Lawrence Grossberg, Professor of Communication Studies and Cultural Studies at the University of North Carolina at Chapel Hill, co-editor of the journal Cultural Studies and author of Caught in the Crossfire: Kids, Politics (2005). This is one of the most original treatments of some of the big questions we confront today. Even familiar subjects gain a new kind of traction as they are repositioned in the authors' sharply defined lens of control and subversion. ... Escape Routes allows us to see what might otherwise be illegible and it continuously executes reversals of standard interpretations of the present. - Saskia Sassen, Professor of Sociology at Columbia University and author of Territory, Authority, Rights (2006)
Acknowledgements
List of figures
Prologue
I THE POLITICAL CONSTITUTION OF THE PRESENT
1. Sovereignty and control reconsidered
2. Escape!
II A CONTEMPORARY ITINERARY OF ESCAPE
3. Life and experience
4. Mobility and migration
5. Labour and precarity
References
Index
Published by Pluto Press in Jul 2008
Paperback ISBN: 9780745327785
eBook ISBN: 9781783716135