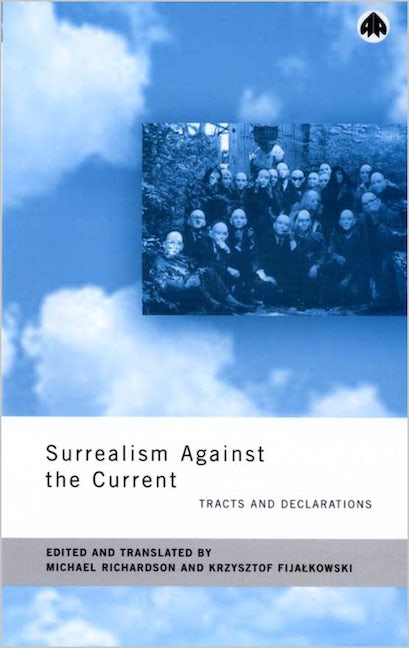 Surrealism Against the Current

A collection of Surrealists texts from across Europe.

Bringing together many Surrealist texts that have never previously been available in English, this collection is an essential guide for anyone who wishes to understand the Surrealist movement.

It traces its development in the words of the Surrealists themselves, offering a definitive expression of Surrealism as a collective movement. It shows the extent of Surrealist positions and interests and shows how, having become a major cultural phenomenon of the twentieth century, the issues it has raised remain central to current debates.

Covering the period 1922-91, these texts illuminate its philosophical, political and ethical positions and locate Surrealism in a broader social and cultural context. Comprising statements from Surrealist groups in Paris, Belgium, Romania, Sweden and Czechoslovakia, and signed by the major participants, it reveals the international dimension of Surrealism.

Michael Richardson lectures in cultural theory and social anthropology at SOAS, University of London. He edited and translated with Krzysztof Fijalkowski 'Refusal of the Shadow: Surrealism and the Caribbean' (Verso, 1996) and more recently 'Georges Bataille: Essential Writings' (Sage Publications, 1998).

Krzysztof Fijatkowski is a lecturer in visual culture and art history at Norwich School of Art and Design and the University of East Anglia. He is also an occasional exhibition curator, artist and guitarist.

Acknowledgements
Introduction: Surrealism as a Collective Adventure
Note on the selection of texts
1. Historical Orientation of Surrealism
2. Surrealism Vis-à-vis Revolutionary Politics
3. The Security of the Spirit
4. Declarations on Colonialism
Appendices
Bibliography
Index
Published by Pluto Press in Sep 2001
eBook ISBN: 9781783716197