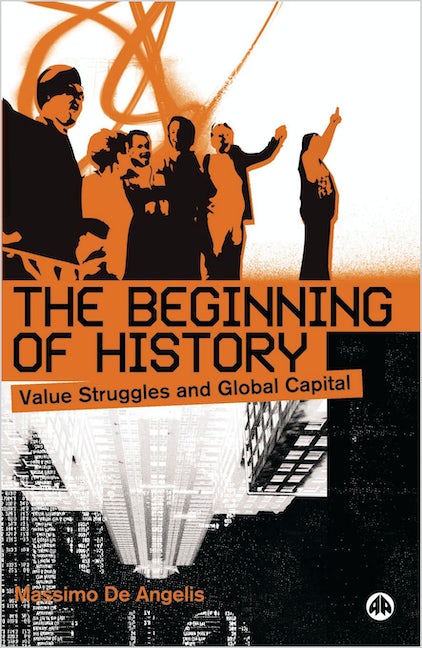 The Beginning of History

Analyses new political economy theory and its role in bringing about radical social change
Francis Fukuyama may declare the 'end of history', and neoliberal capital embraces this belief. However, the diverse struggles for commons and dignity around the planet reveal a different reality: that of the beginning of history. The clash between these two perspectives is the subject matter of this book.

This book analyses the frontline of this struggle. On one side, a social force called capital pursues endless growth and monetary value. On the other side, other social forces strive to rearrange the web of life on their own terms. This book engages with alternative modes of co-production recently posed by the alter-globalisation movement, and it examines what these movements are up against.

Massimo De Angelis is Reader in Political Economy at the University of East London. He is the author of The Beginning of History: Value Struggles and Global Capital (Pluto, 2006), Keynesianism, and Social Conflict and Political Economy (2000). He is editor of the web journal The Commoner.

'Brings creativity to the centre of anti-capitalist thought and through it provides new meanings to the concepts of anarchism, socialism and communism' - Silvia Federici, author of Caliban and the Witch 'A kind of intellectual revolution in itself, both rigourous and exciting' - David Graeber, Associate Professor of Anthropology, Yale University 'A breakthrough book in anti-capitalist theory' - George Caffentzis, Professor, Department of Philosophy, University of Southern Maine
List of Figures
List of Tables and Boxes
Preface
1. The Beginning of History
Part I: Orientations: Co-production of Livelihoods as Contested Terrain
2. Value Struggles
3. Capital as a Social Force
4. With No Limits
5. Production and Reproduction
6. Production, Reproduction and Global Loops
Part II: Global Loops: Some Explorations on the Contemporary Work Machine
7 Enclosures and Disciplinary Integration
8. Global Loops
9. The Global Work Machine
Part III: Context, Contest and Text: Discourses and Their Clashing Practices
10. Marx and the Enclosures we Face
11. Enclosures with No Limits
12. The ‘Law of Value,’ Immaterial Labour, and the ‘Centre' of Power
13. The Valuing and Measuring of Capital
14. Market Freedom and the Prison: Hayek and Bentham
15. The Fractal Panopticon and Ubiquitous Revolution
Part IV: ‘By Asking Questions we Walk’: The Problematics of Decoupling
16. The ‘Outside’
17. Commons
Notes
References
Other Web Resources
Index
Published by Pluto Press in Dec 2006
Paperback ISBN: 9780745320359
eBook ISBN: 9781783716586