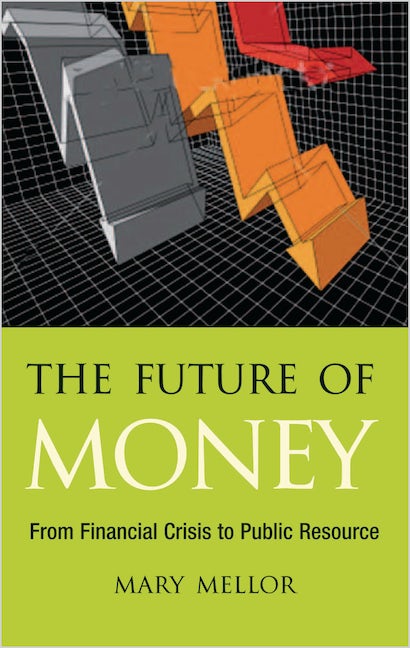 The Future of Money

From Financial Crisis to Public Resource

A history of money and modern banking systems that proposes that only a democratic restructuring of the economy can provide real sustainability.
As the recent financial crisis has revealed, the state is central to the stability of the money system, while the chaotic privately-owned banks reap the benefits without shouldering the risks. This book argues that money is a public resource that has been hijacked by capitalism.

Mary Mellor explores the history of money and modern banking, showing how finance capital has captured bank-created money to enhance speculative ‘leveraged’ profits as well as destroying collective approaches to economic life. Meanwhile, most individuals, and the public economy, have been mired in debt. To correct this obvious injustice, Mellor proposes a public and democratic future for money. Ways are put forward for structuring the money and banking system to provision societies on an equitable, ecologically sustainable 'sufficiency' basis.

This fascinating study of money should be read by all economics students looking for an original analysis of the economy during the current crisis.

'Despite our familiarity with money, too little is understood about money and credit. This book helps to lift the veil on our money system and by doing so will play a part in democratising that system' - Ann Pettifor, author of Just Money: How Society Can Break the Despotic Power of Finance 'This book provides a much more progressive way of seeing the entire financial crisis' - Gary Dymski Professor of Economics University of California Riverside, author of 'The Bank Merger Wave'
Acknowledgements
Introduction
1. What is Money
2. The Privatisation of Money
3. 'People’s Capitalism': Financialisation and Debt
4. Credit and Capitalism
5. The Financial Crisis of 2007-8
6. Lessons from the Crisis
7. Public Money and Sufficiency Provisioning
Appendix:Acronyms and Abbreviations
Bibliography
Index
Published by Pluto Press in Apr 2010
eBook ISBN: 9781783716685