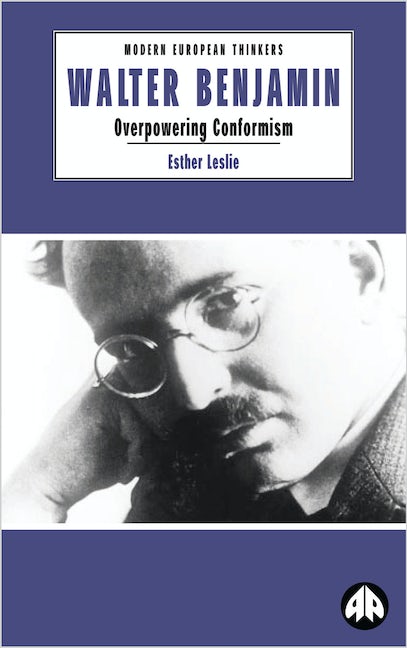 Esther Leslie's path-breaking study of Walter Benjamin is unlike any other book presently available in English on Benjamin, in seeking to make a case for a more politicised reading of Benjamin's oeuvre. In looking at the entirety of Benjamin's work - rather than the four or five essays available in English which tend to form the Benjamin 'canon' - Leslie offers powerful new insights into a key twentieth-century political thinker, correcting the post-structuralist bias that has characterised so much Benjamin scholarship, and repositioning Benjamin's work in its historical and political context.

In her examination of Benjamin's commentary on the politics and aesthetics of technology - from Benjamin's work on nineteenth-century industrial culture to his analyses of the Nazi deployment of the bomber - Esther Leslie re-contextualises Benjamin's writings in a lucid and cogently argued new study.

Esther Leslie is a professor in Political Aesthetics at Birkbeck College, University of London. She is the author of Walter Benjamin (Pluto, 2000), Hollywood Flatlands, Animation, Critical Theory and the Avant Garde (Verso, 2002) and Walter Benjamin, On Photography (Reaktion, 2015).

'An important contribution to understanding Benjamin and technology, and should be read by those wishing to better understand the original reflections on technology by one of the past century's most original thinkers' - Douglas Kellner, UCLA

Author’s note
Preliminaries: An Accumulation of Technological Themes
1. Explosion of a Landscape
2. Benjamin’s Objectives
3. Berlin Chthonic, Photos and Trains and Films and Cars
4. Dream Whirled: Technik and Mirroring
5. Murmurs from Darkest Europe
6. The Work of Art in the Age of Unbearable Capitulation
7. Time for an Unnatural Death
Benjamin’s Finale; Excavating and Re-membering
Published by Pluto Press in May 2000
eBook ISBN: 9781783719617