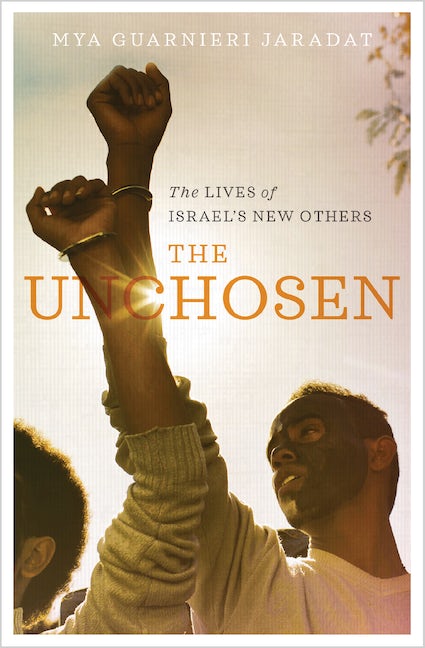 The Lives of Israel's New Others

From illegal kindergartens to anti-immigrant rallies, from detention centres to workers' living quarters, from family homes to the high court, The Unchosen sheds light on one of the most little-known but increasingly significant aspects of Israeli society.

In highlighting Israel's harsh and worsening treatment of these newcomers, The Unchosen presents a fresh angle on the Israel-Palestine conflict, calling into question the state’s perennial justification for mistreatment of Palestinians: 'national security'. More fundamentally, this beautifully written book captures the voices and the struggles of some of the most marginalised and silenced people in Israel today.

Mya Guarnieri Jaradat is a journalist and writer who spent nearly a decade covering Israel and the occupied Palestinian Territories. Her work has been published in a number of literary and media outlets, including The Nation, Al Jazeera English, Foreign Policy, the Guardian and Boston Review. She is the author of The Unchosen: The Lives of Israel's New Others (Pluto, 2017).

'Equipped with a profound knowledge of the plight of non-Jews who have come to Israel in search of work and asylum, Mya Guarnieri Jaradat brings their struggles to life in all of their complexity'

'The world needs more journalists with Guarnieri Jaradat's dedication, compassion, and unblinking intelligence. The Unchosen is as clear-eyed as it is heartfelt ... essential reading for anyone who wants to understand Israel'

- Ben Ehrenreich, journalist and author of The Way to the Spring: Life and Death in Palestine (Penguin, 2016)

'An engaging book ... its contribution to the debate on migration is timely and useful'

'A crucial text for understanding the current refugee crisis in Israel'

'An exemplary and affecting piece of reportage'

List of Figures
Acknowledgements
1. Black Market Kindergartens
2. The New Others: Migrant Workers
3. The Second Wave: A 'Flood' of African Asylum Seekers
4. 'Our Boss Took His Dogs to the Bomb Shelters But Left Us in the Fields': Thai Workers Doing 'Hebrew Work'
5. 'Clean and Tidy': Foreigners in Israel after Operation Cast Lead
6. Black City: The 'Infiltrators'
7. Jewish Girls for the Jewish People: The Knesset and the High Court
8. The Only Darfuri Refugee in Israel
Postscript
Notes
Index