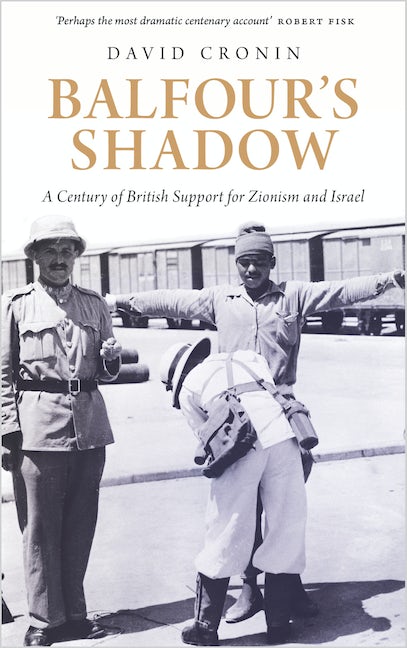 The story of the rhetorical and practical assistance that Britain has given to the Zionist movement and the state of Israel since 1917
This is the controversial history of the British government's involvement in the Zionist project, from the Balfour Declaration in 1917 to the present day.

Written by the British Foreign Secretary Arthur James Balfour, the Declaration stated 'His Majesty's government view with favour the establishment in Palestine of a national home for the Jewish people, and will use their best endeavours to facilitate the achievement of this object.' Its impact on history has been immense and still reverberates a century later, starting what has been referred to as a hundred years of war against the Palestinian people.

This history focuses on the devastating events which resulted from the Declaration, such as the Arab Revolt, the Nakba and establishment of the state, the 1956 and 1967 wars, the Cold War and the Oslo period. It also shines a light on controversial figures such as Tony Blair. In doing so, Balfour's Shadow provides a fascinating take on this much-contested, important history.

'The most dramatic centenary account of the Balfour Declaration' - Robert Fisk, journalist and author 'Sheds light in the dark corners of western imperialist policies that wreak havoc in most of the world. This one about British policies over the 100 years since Balfour is worthy of reading not only by every British person interested in truth but all humans who yearn for peace and justice'  - Mazin Qumsiyeh, Professor at Bethlehem University 'Shows how Britain erected and for decades maintained the scaffolding that gave birth to a settler-colonial state in Palestine and the Palestinian Nakba. Acknowledging Britain's moral responsibility towards the Palestinians is a key message of this timely and courageous book' - Nur Masalha, editor, Journal of Holy Land and Palestine Studies 'Cronin exposes Britain as an enabler of Israeli apartheid. He blends indignation with meticulous objectivity in an alternative history that is concise but comprehensive' - Raymond Deane, Composer 'Describes vividly how, by deception, Britain's imperial designs and perceived need for international Jewish support in wartime gave birth to the Balfour Declaration of November 1917' - Tim Llewellyn, former BBC Middle East Correspondent 'Challenges Theresa May's propagandist celebration through its exposure of the declaration's fundamental illegitimacy, supported by a wealth of factual detail on arms and money transfers, methods of repression and racist discourse' - Rosemary Sayigh, author of Palestinians: From Peasants to Revolutionaries and Too Many Enemies: The Palestinian Experience in Lebanon Balfour's Shadow is a passionate, cogently argued presentation of the tragic and devastating consequences of the 1917 Balfour Declaration.  Cronin's work provides a unique insight into the historic and current relationship between Britain, Israel and the Palestinians. - Selma Dabbagh, novelist and playwright  'This superb book is a revelation, uncovering the dreadful history - and present - of Britain's connivance with Israeli atrocities' - Mark Curtis, author of Secret Affairs: Britain's Collusion with Radical Islam
Timeline of Key Events
Text of Balfour Declaration
Introduction
1. Laying the Foundations
2. Bringing in the Black and Tans
3. ‘We Must Shoot to Kill’
4. Sowing the Seeds of Ethnic Cleansing
5. Arming Israel (1953-1956)
6. Arming Israel (1957-1979)
7. Sidelining the PLO
8. The Loyal Lieutenant
9. Partners in Crime
Postscript: Israel’s Greatest Friend?
Notes
Acknowledgements
Index
Published by Pluto Press in Jun 2017
Paperback ISBN: 9780745399430
eBook ISBN: 9781786801081