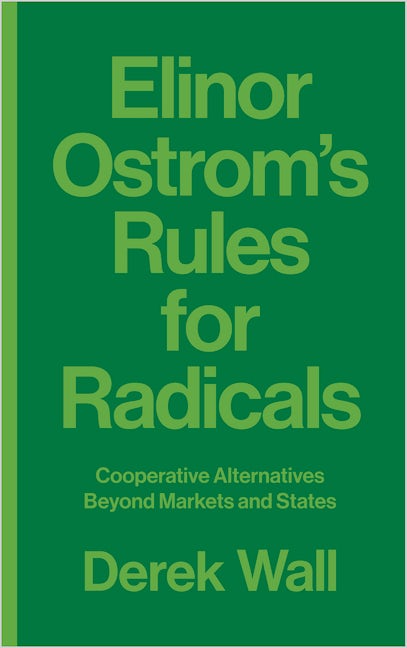 Cooperative Alternatives beyond Markets and States

Ostrom has often been viewed as a conservative or managerial thinker; but Derek Wall’s analysis of her work reveals a how it is invaluable for developing a left political programme in the twenty-first century. Central to Ostrom’s work was the move ‘beyond panaceas’; transforming institutions to widen participation, promote diversity and favour cooperation over competition. She regularly challenged academia as individualist, narrow and elitist and promoted a radical take on education, based on participation. Her investigations into how we share finite resources has radical implications for the Green movement and her rubric for a functioning collective ownership is highly relevant in order in achieving radical social change.

As activists continue to reject traditional models of centralised power, Ostrom’s work will become even more vital, offering a guide to creating economics that exists beyond markets and states.

'Elinor Ostrom's Rules for Radicals has given me food for thought and action' - John McDonnell 'A fascinating insight into the only woman to win the Nobel Prize for economics. I thoroughly recommend this book to anyone interested in alternatives to the neoliberal consensus' - Caroline Lucas, Co-Leader of the Green Party 'An astute interpretative overview of Ostrom's far-ranging scholarship on the commons: inspiration and guidance for a new generation of commons thinkers and activists' - David Bollier, author of Think Like a Commoner, and Director of the Reinventing the Commons Program at the Schumacher Center for a New Economics 'The UK's vote to leave the EU and the election of Donald Trump as US President are both signs that working people are rejecting the global economy. This makes the work of Elinor Ostrom, with its focus on common ownership and political empowerment, very timely' - Molly Scott Cato, Green MEP for South West England
Acknowledgements
Rules for Radicals
1. Elinor Ostrom's Radical Life
2. The Commons: From Tragedy to Triumph
3. Climate Change, Ecology and Green Politics
4. Beyond Markets and States
5. Deep Democracy
6. Feminism and Intersectionality
7. Trust and Cooperation
8. Science for the People
9. Transforming Institutions
10. Conflict and Contestation
Bibliography
Resources for Change
Index
Published by Pluto Press in Oct 2017
Paperback ISBN: 9780745399355
eBook ISBN: 9781786801234