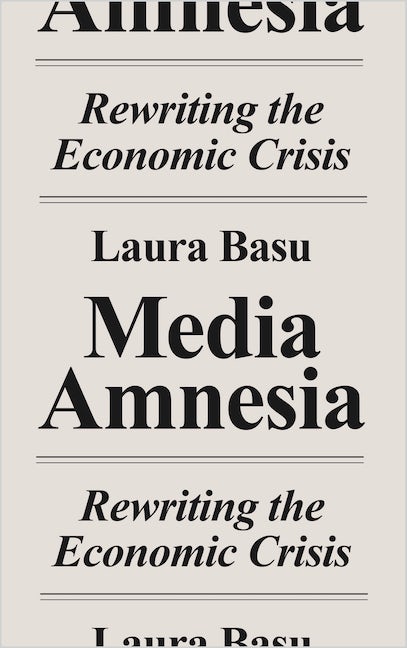 How the media has been complicit in sustaining free market capitalism.
From Donald Trump, to Brexit and the rise of nationalist populism across Europe, what role has the media played in shaping our current political moment?

Following the news coverage of a decade-long crisis that includes the 2008 financial crash and the Great Recession, the UK deficit, the eurozone crisis, austerity and rising inequality, we see that coverage is suffering from an acute amnesia about the policies that caused the crisis in the first place. Rather than remembering its roots in the dynamics of 'free market' capitalism, the media remains devoted to a narrative of swollen public sectors, out-of-control immigration and benefits cheats. How has history been so quickly rewritten, and what does this mean for attempts to solve the economic problems?

Going behind the coverage, to decode the workings of media power, Basu shows that without a rejection of neoliberal capitalism we'll be stuck in an infinite cycle of crisis.

Laura Basu is a fellow in the Media and Communications Department at Goldsmiths, University of London, and at the Institute for Cultural Inquiry, Utrecht University. She is the author of Media Amnesia (Pluto, 2018), and editor of The Media and Austerity (Routledge, 2018).

'This is a fascinating account of elite and media attempts to repair the neo-liberal hegemony in the wake of the 2008 crash, and prolonged recession. Based on careful factual analysis and eloquently written, it will be of wide interest to academics and students in media studies, politics, and economics as well as activists' - Professor James Curran, Goldsmiths, University of London 'Laura Basu provides a thoughtful and brilliant examination of how mainstream media have so completely failed to cover the economy in a manner that encourages democratic governance, or a sound economy... Highly readable, Basu's book should be required reading for faculty and students in media departments, as well as economics and political science!' - Robert McChesney, co-author, People Get Ready: The Fight Against a Jobless Economy and a Citizenless Democracy 'Before the term 'fake news' came into common use, the media actively peddled the flagrant fiction that the Global Crisis of the late 2000s resulted from the misguided policies of governments. To understand this 'rewriting' of the crisis capitalism brought upon us read this book. The author reveals the full iniquity of the media transforming commonsense into pernicious nonsense' - John Weeks, Professor Emeritus of Economics, SOAS, University of London
Acknowledgements
Introduction
1. Crash
2. Deficit
3. Slump
4. Eurocrisis
5. Inequality
6. Curing Media Amnesia
Glossary
References
Index
Published by Pluto Press in Apr 2018
Paperback ISBN: 9780745337890
Hardcover ISBN: 9780745337906
eBook ISBN: 9781786802767