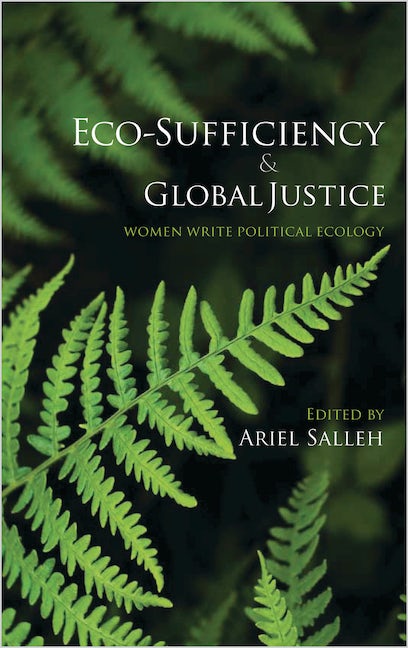 Female academics discuss the big issues of our time
As the twenty-first century faces a crisis of democracy and sustainability, this book brings women academics and alternative globalisation activists into conversation.

Through studies of global neoliberalism, ecological debt, climate change, and the ongoing devaluation of reproductive and subsistence labour, these uncompromising essays by women thinkers expose the limits of current scholarship in political economy, ecological economics, and sustainability science.

Ariel Salleh is an author who has made big waves in ecopolitics and environmental ethics. She is currently a researcher in Political Economy at the University of Sydney and a co-editor of the journal Capitalism Nature Socialism and the author of Eco-Sufficiency and Global Justice (Pluto, 2009).

'The Eco-Sufficiency anthology based on the diversity and pluralism of perspectives inspired by ecofeminism is a must read for anyone searching for alternatives' - Vandana Shiva, Director of the Foundation for Science, Technology, and Ecology, New Delhi; author, activist, and winner of the Alternative Nobel Prize 'By far and away the best collection of ecological feminist writing I have found' - Richard Norgaard, Professor of Energy and Resources, University of California at Berkeley 'People are much more than the atomised units of neoclassical and environmental economics. Economic and ecological practices conducted by women and other marginalised groupings must be recognised as a source of new theoretical understandings, critical for social and environmental justice to be achieved' - Peter Dickens, Social and Political Sciences, University of Cambridge; author of the award winning book Society & Nature (Polity, 2004) 'These new and incisive perspectives put forth a transformative agenda for global justice. And in doing so, the collection draws all of us -- activists and academics alike -- closer to a common political denominator in the search for a true alternative to globalisation' - Lim Li Ching, leading international biodiversity activist, Third World Network, Kuala Lumpur
Ecological Debt: Embodied Debt by Ariel Salleh
PART I - HISTORIES
1. The Devaluation of Women's Labour by Silvia Federici
Who is the 'He' of He Who Decides in Economic Discourse? by Ewa Charkiewicz
2. The Diversity Matrix: Relationship and Complexity by Susan Hawthorne
PART II - MATTER
3. Development for Some is Violence for Others by Nalini Nayak
4. Nuclearised Bodies and Militarised Space by Zohl de Ishtar
5. Women and Deliberative Water Management by Andrea Moraes and Ellie Perkins
PART III - GOVERNANCE
6. Mainstreaming Trade and Millennium Development Goals? by Gig Francisco and Peggy Antrobus
7. Policy and the Measure of Woman by Marilyn Waring
8. Feminist Ecological Economics in Theory and Practice by Sabine U. O'Hara
PART IV - ENERGY
9. Who Pays for Kyoto Protocol? Selling Oxygen and Selling Sex by Ana Isla
10. How Global Warming is Gendered by Meike Spitzner
11. Women and the Abuja Declaration for Energy Sovereignty by Leigh Brownhill and Terisa E. Turner
PART V - MOVEMENT
12. Ecofeminist Political Economy and the Politics of Money by Mary Mellor
13. Saving Women: Saving the Commons by Leo Podlashuc
14. From Eco-Sufficiency to Global Justice by Ariel Salleh
Index
Published by Pluto Press in Jan 2009
Paperback ISBN: 9780745328638
eBook ISBN: 9781786802859