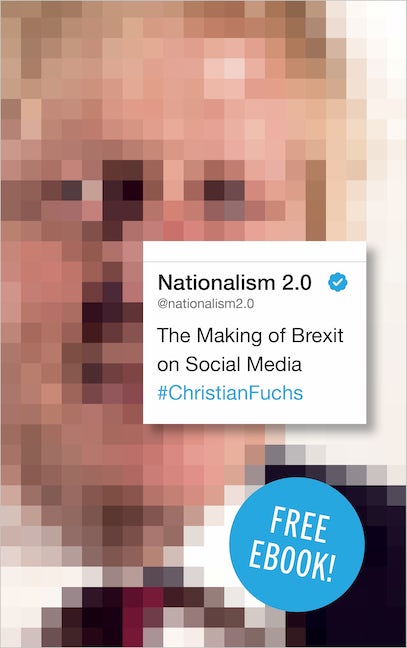 The Making of Brexit on Social Media

How social media deepened nationalist sentiment in the UK during the Brexit campaign.

This is a free ebook - a companion to Digital Demagogue: Authoritarian Capitalism in the Age of Trump and Twitter.

By analysing reactions on social media immediately after the results of the Brexit referendum were announced, Christian Fuchs shows how Brexit deeply polarised British society. By using extensive empirical data drawn from the comments and reactions of users who posted on Nigel Farage's and Boris Johnsons' Facebook profiles, a disturbing picture of a deepening nationalist sentiment appears.

Nationalism 2.0 reveals how the political fetishism of nationalist ideologies has displaced attention from the roles of capitalism and class as factors causing social problems today.

Authoritarian Capitalism in the Age of Social Media

‘We need an Internet and a world that serve the many, not the few.’ Christian Fuchs on the plethora of nationalist and racist ideologies plaguing our timelines.

END_OF_DOCUMENT_TOKEN_TO_BE_REPLACED
Back to Top
X