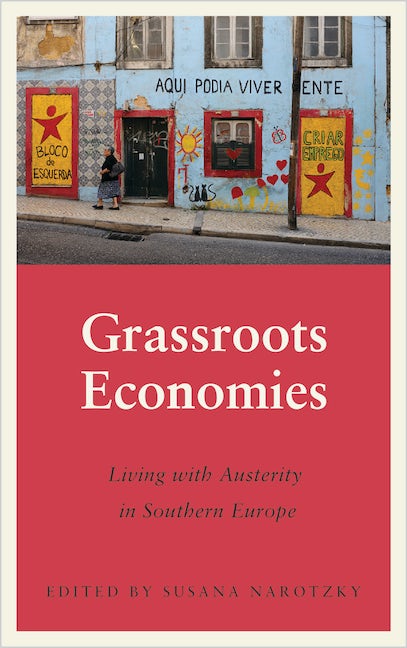 Living with Austerity in Southern Europe

The austerity crisis has radically altered the economic landscape of Southern Europe. But alongside the decimation of public services and infrastructure lies the wreckage of a generation’s visions for the future. In Greece, Italy, Spain and Portugal, there is a new, difficult reality of downward mobility.

Grassroots Economies interrogates the effects of the economic crisis on the livelihood of working people, providing insight into their anxieties. Drawing on a wide range of ethnographic material, it is a distinctive comparative analysis that explores the contradictions of their coping mechanisms and support structures.

With a focus on gender, the book explores values and ideologies, including dispossession and accumulation. Ultimately it demonstrates that everyday interactions on the local scale provide a significant sense of the global.

'Grassroots Economies offers an astute and heart-breaking account of the toll decades of austerity politics have taken on southern Europe. Each chapter offers remarkable insights - taken together they present a sober and illuminating portrait of dispossession and loss.'

- Jane Collins, author of 'The Politics of Value: Three Movements to Change How We Think about the Economy’

'This book vividly documents how people faced with austerity policies activated intergenerational solidarity and self-sacrifice. It is a splendid, rigorously documented and well-written account of people's resilience in difficult times that may be of even greater interest now as the pandemic crisis unfolds.'

'This book shows how the real economy works and thus redefines key concepts in economics such as competition, monopoly, regulation, work and value. All economists should read this book.'

'Susana Narotzky and her colleagues have inquired into the precarious lives of people confronted with austerity in the aftermath of the 2008 financial crisis. Their Grassroot Economies is a magistral endeavor to account for the current brutalisation of societies by capitalist practices and neoliberal policies.'

'This volume represents a major contribution to economic anthropology and to the comparative ethnology of southern Europe. It is a rich, evocative ethnographic portrait of lives and livelihoods under conditions of austerity in southern Europe.'