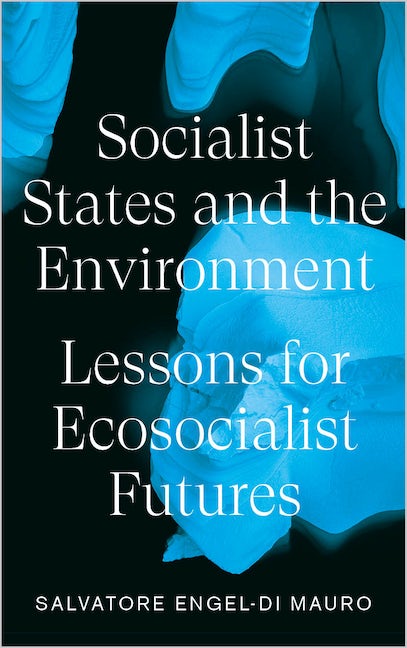 Socialist States and the Environment

More than thirty years after the collapse of the USSR, the critique of state socialism is still used to deny alternatives to capitalism, irrespective of global capitalist ecological and social devastation. There is seemingly nothing worthwhile salvaging from decades of state socialist experiences.

As the climate crisis deepens, Engel-Di Mauro argues that we need to re-evaluate the environmental practices and policies of state socialism, especially as they had more environmentally beneficial than destructive effects. Rather than dismissing state socialism's heritage out of hand, we should reclaim it for contemporary eco-socialist ends.

By means of a comparative and multiple-scaled approach, Engel-Di Mauro points to highly diverse and environmentally constructive state socialist experiences. Taking the reader from the USSR to China and Cuba, this is a fiery and contentious look at what worked, what didn't, and how we can move towards an eco-socialist future.

'A fascinating account. For too long we have tended to demonise socialist states, this book shows that to overcome the climate crisis, there are positive lessons to be learnt, from Lenin's promotion of conservation to Cuba's achievements in promoting ecological policymaking'

- Derek Wall is a former International Coordinator of the Green Party of England and Wales and teaches economics at Goldsmiths, University of London

'Many people have realised that ecological sustainability cannot be achieved under capitalism. But how about (eco-) socialism? For everyone who is interested in a sustainable future and a new society without oppression, I strongly recommend this book'

- Minqi Li, Professor of Economics, University of Utah and author of 'China and the 21st Century Crisis' (Pluto, 2015)

'In our current moment of a near total co-optation of environmentalism where billionaires and military forces are looked to for solutions to the problems they create, Salvatore Engel-Di Mauro provides a serious, data-driven, and sober look at what socialist states have been able to do for the environment'

'Compelling - by doing a deep analysis of environmental policies and practices on the USSR, China, and Cuba, Engel-Di Mauro answers these questions: is possible to build ecosocialist futures from previous accomplishments of state-socialist countries? And what they can offer for future socialist projects?'

- Ana Isla, Professor Emerita at the Department of Sociology and the Centre for Women and Gender Studies, Brock University

'Sharply erudite... takes us on a brilliant guided tour of the environmental programs of socialist states and a variety of community-led initiatives. Among them, Thomas Sankara's Burkina Faso, Cuba and its agroecology, the PRC up to 1978, the USSR and many of the Eastern European countries up to 1990, various African people's republics through 1992, and, despite their largely privatised economies, the Bolivias, Venezuelas, and Vietnams of today'