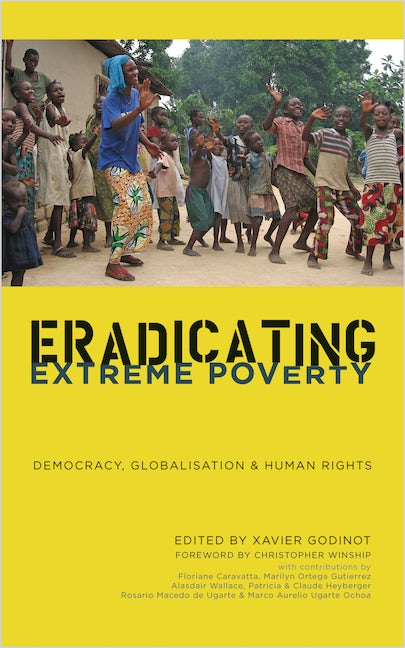 Rejects traditional 'top-down' approaches, arguing that the poor in developing countries must be deeply involved in their own liberation from poverty.
The failure of attempts to tackle global poverty have bred cynicism and 'compassion fatigue'. Eradicating Extreme Poverty provides an urgently needed fresh approach which will re-energise action on this issue.

Rejecting traditional 'top-down' approaches, Xavier Godinot and his colleagues start from the experiences, capabilities and strategies of the poor themselves. They argue that the first step is a close connection with poor communities followed by a commitment to take action alongside them. Life-stories from Burkina Faso, France, Peru and the Philippines are used to show that the poor must be involved in their own liberation.

After decades of failed development policies, this book outlines a radical new approach which will enliven debate amongst policy-makers, researchers, students and academics.

Xavier Godinot works at the headquarters of the International Movement ATD Fourth World, where he was director of its Research Institute for twelve years. He co-ordinates antipoverty projects in Southern and Northern countries, with families living in rubbish dumps, under bridges and in slums. He has edited several books about poverty in the North and the South.

'This gem of a book gets under the skin of poverty. It shows the human reality of poverty: the endless struggle for respect, and against indignity and stigma. Read it to learn what development should be about' - Duncan Green, head of research, Oxfam Great Britain 'This important book argues convincingly that extreme poverty is a human rights crisis that demands urgent commitments from states to respect, protect and fulfil human rights for all' - Salil Shetty, Secretary General of Amnesty International 'Vital reading for all those working to end poverty' - Deepa Narayan, Director, Voices of the Poor project and former Senior Adviser at the World Bank 'Offers a path towards the eradication of extreme poverty, and makes a compelling case for why we have no choice but trying' - Esther Duflo, Professor of Poverty Alleviation and Development Economics, MIT
Preface to the English Edition, by Xavier Godinot
Acknowledgments
Foreword, by Christopher Winship
Introduction: Insecurity, poverty and extreme poverty, by Xavier Godinot
PART ONE
Introduction: Resisting extreme poverty every day, by Xavier Godinot
Country Profiles: Burkina Faso, The Philippines, France, Peru
1. The child who walked with death (Burkina Faso), by Patricia and Claude Heyberger
2. Gold under the bridge (The Philippines), by Marilyn Ortega Gutierrez and Alasdair Wallace
3. Resist to exist (France), by Floriane Caravatta
4. Staying together through thick and thin (Peru), by Rosario Macedo de Ugarte and Marco Aurelio Ugarte Ochoa
PART TWO
Introduction: Human rights and human responsibilities, by Xavier Godinot
5. Basic ties and fundamental rights, by Xavier Godinot, Patricia and Claude Heyberger, Rosario Macedo de Ugarte and Marco Aurelio Ugarte Ochoa
6. Democracy, globalisation and extreme poverty, by Xavier Godinot
Conclusion: The eradication of poverty, by Xavier Godinot
Index
Published by Pluto Press in Jan 2012
Paperback ISBN: 9780745331973
eBook ISBN: 9781849646321