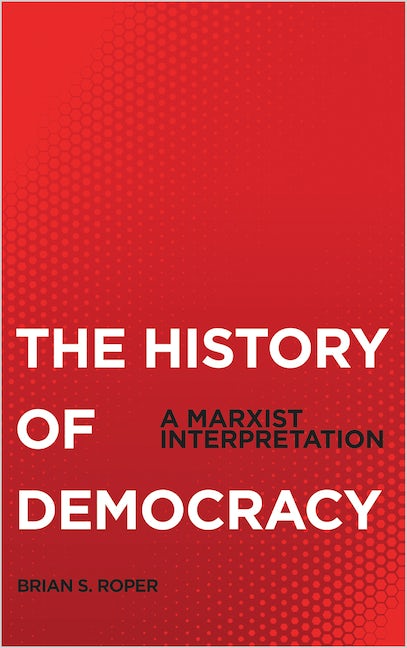 The History of Democracy

A critique of liberal democracy, from ancient Athens to today.
Democracy under neoliberalism has become tarnished, as governments become disconnected from voters and pursue policies against the interests of the people. And yet the ideal of democracy continues to inspire movements around the world.

Brian Roper refreshes our understanding of democracy using a Marxist framework. He traces the history of democracy from ancient Athens to the emergence of liberal representative and socialist participatory democracy in Europe and North America, through to the global spread of democracy during the past century.

An an alternative, he offers an engaging Marxist critique of representative democracy, which has the potential to undermine the existing status quo.

'In this stunning and panoramic survey, Brian Roper sheds enormous light on the theory and practice of democracy across the ages' - David McNally, Professor of Political Science, York University, author of Another World is Possible and Global Slump 'Democracy is the product of intense class struggles rather than the incremental decisions of enlightened lawmakers. Brian Roper's insightful and coherent survey convincingly makes this argument through a series of accessible studies that range from ancient Athens through the English Civil War to the workers' revolutions of the 19th and 20th centuries' - Rick Kuhn, Deutscher Prize winner, Reader in Politics at the Australian National University and long-time activist.
Preface and Acknowledgements
Introduction
1. Origins: Democracy in the Ancient Greek World
2. Democracy Suppressed: The Roman Republic
3. The Early Middle Ages and the Transition from Feudalism to Capitalism
4. The English Revolution and Parliamentary Democracy
5. The American Revolution and Constitutional Redefinition of Democracy
6. The Revolutionary Revival of Democracy in France
7. The Revolutions of 1848-49
8. Capitalist Expansion, Globalization and Democratization
9. The Marxist Critique of Capitalism and Representative Democracy
10. Precursors of Socialist Participatory Democracy: The Paris Commune 1871 and Russian Revolutions 1905 and 1917
General Bibliography
Published by Pluto Press in Nov 2012
Paperback ISBN: 9780745331898
eBook ISBN: 9781849647144