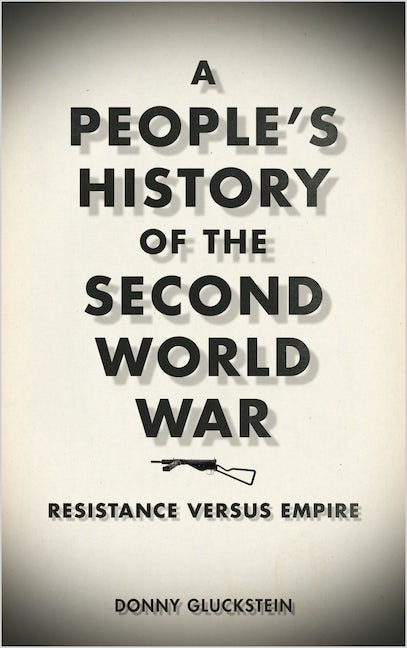 A People's History of the Second World War

A history of the Second World War as fought 'from below' by anti-fascist militias, who worked both with and against the allied powers.
This history reclaims the Second World War as a global fight 'from below'. The vast majority of historical accounts have focused on the regular armies of the allied powers, however, the often-neglected people's militias were crucial not only to the defeat of fascism, but also colonialism, imperialism and even capitalism.

Looking at militias in Yugoslavia, Greece, Poland and Latvia, as well as the Warsaw Uprising and anti-fascist movements in Germany, it presents a different battle, fought on different terms. Widening its scope to India – where an independence movement was shaking an already weak British Empire, and onto alternative anti-imperialist struggles in Indonesia and Vietnam, a global picture of people's resistance is revealed.

Despite these radical elements, the allied governments were more interested in creating a new order to suit their interests, and many of these movements were ultimately betrayed. However, many shook the existing world order to its core.

Donny Gluckstein is a lecturer in history at Stevenson College, Edinburgh. He is the author of several books on Marxist history.

'Rigorously structuring his analysis around the two central themes of popular resistance and inter-imperialist rivalry, Gluckstein makes an indispensable contribution to understanding the reality of the conflict in all its complexity' - Neil Davidson, Senior Research Fellow, University of Strathclyde and author of Discovering the Scottish Revolution 'Combines an impressive grasp of the war's shifting complexities with the brilliance of a sweeping and penetrating political analysis' - Andy Durgan, author of The Spanish Civil War (Palgrave 2007) 'The Second World War is so thoroughly surrounded by myth that it is hard to grasp its real character. Gluckstein offers a new interpretation, portraying 1939-45 as two parallel wars: one waged by the Great Powers among themselves, the other by the peoples against fascism' - Alex Callinicos
Preface
1. Introduction
2. Spanish Prelude
PART 1: Yugoslavia, Greece, Poland and Latvia – Between the Blocs
3. Yugoslavia: Balancing Powers
4. Greece: Allies at War with the Resistance
5. Poland’s Warsaw Uprising
6. Latvia: Standing History on its Head
PART 2: France, Britain and the USA– Divisions Within the Allies
7. France: Imperial Glory Versus Resistance Ideology
8. Britain: The Myth of Unity
9. USA: Racism in the Arsenal of Democracy
PART 3: Germany, Austria and Italy – Under the Axis
10. Germany: Conservatives and Antifa
11. Austria: Resistance and Ruling Class Capitulation
12. Italy: The Working Class and the Two Wars
PART 4: India, Indonesia and Vietnam - Different Enemies
13. India: From Famine to Independence
14. Indonesia: Axis and Allies United Against the People
15. Vietnam: Anti-Imperialist Breakthrough
16. Conclusion
17. Chronology
Notes
Index