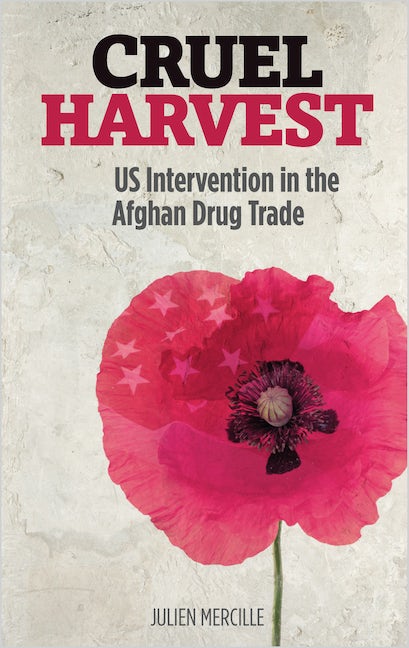 US Intervention in the Afghan Drug Trade

The argument against narco-terrorism in Afghanistan
This book lifts the lid on the reality of Afghanistan’s growing drug trade and the role played by the US military in its trajectory.

Where conventional accounts blame the Taliban for the expansion of drug production, Cruel Harvest shows that the US shares responsibility by supporting drug lords, refusing to adopt effective drug control policies and failing to crack down on drug money laundered through Western banks.

Julien Mercille argues that the best way to address drug problems is by reducing demand in consumer countries, not by conducting fruitless and damaging counter narcotics missions in Afghanistan.

Julien Mercille is a lecturer in the School of Geography, Planning and Environmental Policy at University College Dublin, Ireland. He has had articles published in Third World Quarterly, Geopolitics and Political Geography, amongst others.

'Rips the cover off one of the dirtiest secrets of the war on Afghanistan: the corrosive relationship between the CIA and the opium trade. This is hard-boiled history from the front lines of America's longest and cruellest war' - Jeffrey St. Clair, editor of CounterPunch, co-author of Whiteout: the CIA, Drugs and the Press (1998) 'Mercille's meticulous research and writing are an indispensable part of the story of this war - his book exposes an issue that has been undercovered for far too long' - Sonali Kolhatkar, author of Bleeding Afghanistan: Washington, Warlords, and the Propaganda of Silence 'An excellent addition to the library of anyone interested in comprehending the intertwined world of great power foreign policy, regional and civil wars, and the world-wide narcotics trade' - Matthew Hoh, Senior Fellow, Center for International Policy, Washington DC 'A useful exposition of the counter-narcotic rationale for the West's continued war in Afghanistan and its wider relationship to American primacy' - Doug Stokes, author of America’s Other War: Terrorizing Colombia (2005) 'Exposing the faces of Jehadi fundamentalists is very important so the world is aware that the US ... continues to keep them in power. Mercille's book breaks this taboo' - Malalai Joya, former member of Afghanistan’s parliament 'Cutting edge' - Elizabeth Gould and Paul Fitzgerald, authors of Invisible History:Afghanistan's Untold Story (2009)
Abbreviations
Acknowledgements
1. Introduction
2. Perspectives
3. Rise to Prominence
4. From Forgotten State to Rogue State
5. To Afghanistan
6. Washington and the Afghan Drug Trade since 2001
7. Solutions
8. Conclusion: American Power, Drugs, and Drug Wars
Notes
Index
Published by Pluto Press in Dec 2012
Paperback ISBN: 9780745332321
eBook ISBN: 9781849647779