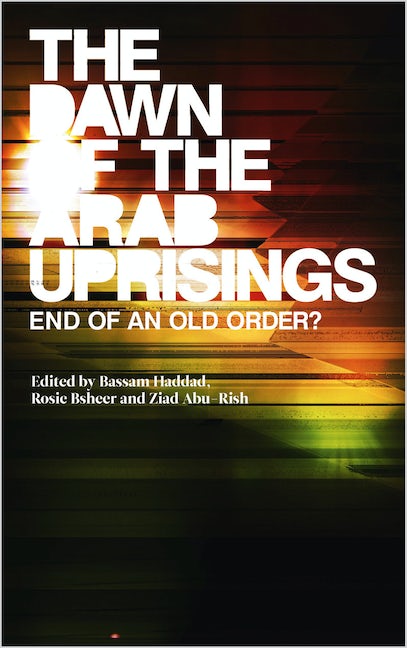 The Dawn of the Arab Uprisings

End of an Old Order?

An introductory collection to the drama of the Arab Spring
This is a one-stop introduction to the multifaceted phenomenon of the 'Arab Spring', from the writers of Jadaliyya.

Covering the full range of issues involved in these historic events, from political economy and the role of social media, to international politics, gender, labour and the impact on culture, these firsthand accounts explore the inspirational uprisings in a way unavailable through mainstream Western and Arab media.

Covering all the major centres of disruption, including Tunisia, Egypt, Syria, Libya and Bahrain, the writers also look further afield, to Jordan, Saudi Arabia, Lebanon, Palestine, and Iraq. The Dawn of the Arab Uprisings is the best place to start for anyone wanting to understand and interpret these dramatic events.

Bassam Haddad is Director of the Middle East Studies Program and teaches in the Department of Public and International Affairs at George Mason University. He is the author of Business Networks in Syria: The Political Economy of Authoritarian Resilience (2012).

Rosie Bsheer is a PhD Candidate in the Department of History at Columbia University.

Ziad Abu-Rish is Assistant Professor in the Department of History at Ohio University.

'During the Arab uprisings, my first port of call every day was Jadaliyya to understand and interpret the events. This book will be a much-treasured volume' - Dr Laleh Khalili, SOAS, University of London 'The outburst of the Arab Revolutions demands imaginative and novel perspectives on the Arab world, and Jadaliyya has managed to provide a unique forum covering the region with a fresh approach to its issues and problems' - Fawwaz Traboulsi, author of A History of Modern Lebanon 'Jadaliyya has established itself as an indispensable source dealing with the contemporary Arab world. This collection of its pieces on the Arab uprisings is perhaps the best introduction to the political movements that have shaken that region' - Talal Asad, City University of New York 'A primer of importance not only to students of the 'Arab spring', but also to those concerned with protest more generally. Registering both the exhilarating optimism and crushing disappointment of contemporary political life, this volume gives voice to some of the possibilities for and impasses to political transformation' - Lisa Wedeen, Mary R. Morton Professor of Political Science and the College,University of Chicago 'As contemporary reflections, these writings capture the unfolding of revolutionary events as they happened and convey the uncertainties, hopes and disappointments of collective worlds being remade' - Timothy Mitchell, Columbia University
Acknowledgments
Foreword
Jadaliyya: Archiving the Revolution
Roger Owen
Introduction
Bassam Haddad, Rosie Bsheer, and Ziad Abu-Rish
Section I - Opening Articles
1. Impromptu: A Word - Sinan Antoon
2. Preliminary Historical Observations on the Arab Revolutions of 2011 - Rashid Khalidi
3. Awakening, Cataclysm, or Just a Series of Events? Reflections on the Current Wave of Protest in the Arab World - Michael Hudson
4. Paradoxes of Arab Refo-lutions - Asef Bayat
5. The Year of the Citizen - Mouin Rabbani
6. Three Powerfully Wrong - and Wrongly Powerful - American Narratives about the Arab Spring - Jillian Schwedler, Joshua Stacher, and Stacey Philbrick Yadav
Section II - Tunisia
7. The Tunisian Revolution: Initial Reflections - Mohammed Bamyeh
8. Tunisia's Glorious Revolution and its Implications - Noureddine Jebnoun
9. Let's Not Forget about Tunisia - Nouri Gana
10. The Battle for Tunisia - Nouri Gana
Section III - Egypt
11. The Poetry of Revolt - Elliott Colla
12. Why Mubarak is Out - Paul Amar
13. Egypt's Revolution 2.0: The Facebook Factor - Linda Herrera
14. Egypt's Three Revolutions: The Force of History Behind this Popular Uprising - Omnia El Shakry
15. The Architects of the Egyptian Uprising and the Challenges Ahead - Saba Mahmood
16. The Revolution Against Neoliberalism - Walter Armbrust
17. Egypt's Orderly Transition: International Aid and the Rush to Structural Adjustment - Adam Hanieh
Section IV - Libya
18. The Arabs in Africa - Callie Maidhof
19. Tribes of Libya as the Third Front: Myths and Realities of Non-State Actors in the Long Battle for Misrata - Jamila Benkato
20. Solidarity and Intervention in Libya - Asli U Bali and Ziad Abu-Rish
Section V - Bahrain
21. Let's Talk about Sect - Tahiyya Lulu
22. Distortions of Dialogue - Tahiyya Lulu
23. When Petro-Dictators Unite: The Bahraini Opposition's Struggle for Survival - Rosie Bsheer and Ziad Abu-Rish
Section VI - Yemen
24. Yemen's Turn: An Overview - Lara Aryani
25. How it Started in Yemen: From Tahrir to Taghyir - Nir Rosen
26. Saleh Defiant - Ziad Abu-Rish
Section VII - Syria
27. Why Syria is Not Next...So Far - Bassam Haddad
28. Fear of Arrest - Hani Sayed
29. Syrian Hope: A Journal - Amal Hanano
Section VIII - Regional Reverberations of the Arab Uprisings
30. The Political Status Quo, Economic Development, and Protests in Jordan - Ziad Abu-Rish
31. Dissent and its Discontents: Protesting the Saudi State - Rosie Bsheer
32. The Never Ending Story: Protests and Constitutions in Morocco - Emanuela Dalmasso and Francesco Cavatorta
33. Emergencies and Economics: Algeria and the Politics of Memory - Muriam Haleh Davis
34. Iraq and its Tahrir Square - Zainab Saleh
35. Tahrir's Other Sky - Noura Erakat and Sherene Seikaly
36. What is [the] Left? - Maya Mikdashi
Epilogue - Parting Thoughts - Madawi Al-Rasheed
Notes
Index
Published by Pluto Press in Oct 2012
eBook ISBN: 9781849647991