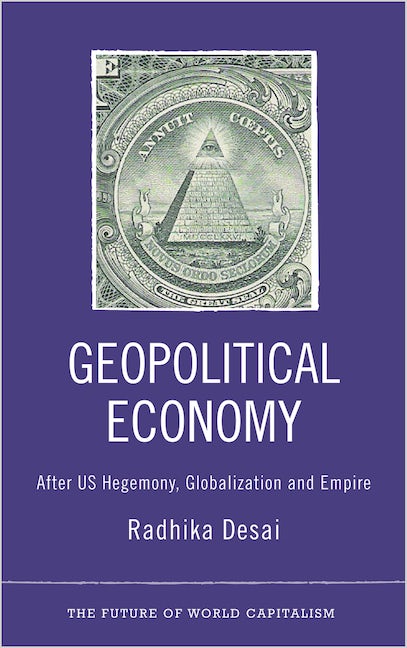 After US Hegemony, Globalization and Empire

Radhika Desai offers a radical critique of the theories of US hegemony, globalisation and empire which dominate academic international political economy and international relations, revealing their ideological origins in successive failed US attempts at world dominance through the dollar.

Desai revitalizes revolutionary intellectual traditions which combine class and national perspectives on 'the relations of producing nations'. At a time of global upheavals and profound shifts in the distribution of world power, Geopolitical Economy forges a vivid and compelling account of the historical processes which are shaping the contemporary international order.

Radhika Desai is Professor of Political Studies at the University of Manitoba, Canada. She is the author of Slouching Towards Ayodhya (Three Essays Collective, 2004) and Geopolitical Economy (Pluto, 2013).

'You are not likely to find a better contemporary history of the world's economy than this one' - Jeff Madrick, Editor, Challenge 'Shatters the stale notions that characterise traditional international political economy' - Professor Ilene Grabel, Josef Korbel School of International Studies, University of Denver, USA 'Desai has given us an essential work on global political economy, deftly weaving together a critical history of the US dollar, a devastating critique of global hegemony theory, and a rethinking of Marxian and Keynesian ideas about global economic crisis' - Gary Dymski, Leeds University Business School and University of California, Riverside 'This impressive book powerfully questions the conventional wisdoms of both the right and the left about US hegemony, globalisation, and the 'new American empire'. Radical scholarship at its best' - Mel Watkins, Professor Emeritus of Economics and Political Science, University of Toronto 'A refreshing book with a punch. Desai not only charts the end of an era in global political economy, she offers us a stimulating framework for understanding the coming multipolar period, one full of promise if only we recognise its key features' - Randall Germain Professor of Political Science, Carleton University, Canada 'A bold and imaginative book. Desai argues her case with an analysis of history that has both sweep and rigour' - Prabhat Patnaik, Professor Emeritus, Department of Economic Studies and Planning, Jawaharlal Nehru University, former Chairman of the Kerala State Planning Commission, Member of the UN taskforce on the reform of the world financial system. 'A penetrating account of the complex interrelations between US hegemony and the transnational sweep of capital. Firmly planted in the long tradition of historical materialist analysis of imperialism, Desai breaks new ground in taking forward some of the most incisive theorisations from this lineage, critically dissecting theories that have for too long assumed that interstate rivalries were a thing of the past' - Kees van der Pijl, Professor Emeritus, Department of International Relations, University of Sussex 'Challenges several widely accepted ideas. I have every confidence that every student of the global economy and polity will greatly benefit by studying this outstanding monograph' - Amiya Kumar Bagchi, Founder-Director of the Centre for Studies in Social Sciences, Kolkata and former Reserve Bank Professor at the Centre for Studies in Social Sciences, Calcutta 'A critical and vivid analysis of what she aptly calls the geopolitical economy of capitalism which will be attractive as a textbook for international political economy courses at both undergraduate and graduate levels and a thrilling read for readers at large' - Makoto Itoh, Professor emeritus of The University of Tokyo. 'A clear-eyed and incisive look at some of the central concerns in the world today. This book will persuade and engage you.' - Jayati Ghosh, Professor at the Centre for Economic Studies and Planning, Jawaharlal Nehru University, Executive Secretary of the International Development Economics Associates (IDEAS).
Contents
Acknowledgements
List of Abbreviations
1. Introduction: Why Geopolitical Economy?
2. The Materiality of Nations
3. The US Imperial Career
4. Ambition and Realities
5. The Retrospection of Hegemony Stability Theory
6. Renewal?
7. Globalisation?
8. Empire?
9. Conclusion: The Multipolar Moment
References
Index
Published by Pluto Press in Feb 2013
Paperback ISBN: 9780745329925
eBook ISBN: 9781849648400