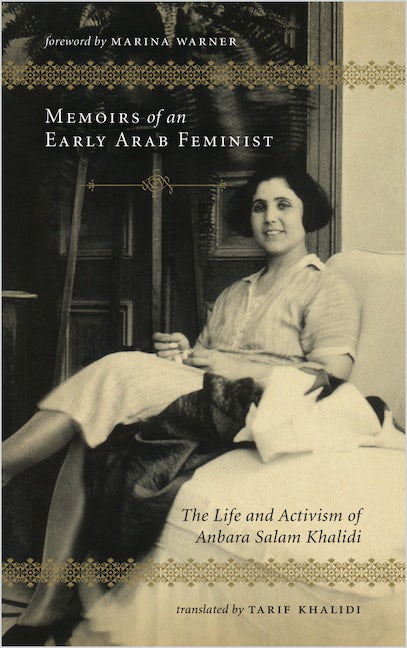 Memoirs of an Early Arab Feminist

The Life and Activism of Anbara Salam Khalidi

The first English translation of the memoirs of Anbara Salam Khalidi, the iconic Arab feminist.

Memoirs of an Early Arab Feminist is the first English translation of the memoirs of Anbara Salam Khalidi, the iconic Arab feminist. At a time when the effects of the revolution and counterrevolution of the Arab Spring loom heavy over Middle Eastern politics, this book brings to life an earlier period of social turmoil and women's activism through one remarkable life.

Anbara Salam was born in 1897 to a notable Sunni Muslim family of Beirut. She grew up in 'Greater Syria', in which unhindered travel and cross-cultural exchange between Beirut, Jerusalem and Damascus was possible. Her political activities caused countless scandals, from the series of newspaper articles calling on women to fight for their rights within the Ottoman Empire, to removing her veil during a 1927 lecture at the American University of Beirut. In later life she translated Homer and Virgil into Arabic and fled from Jerusalem to Beirut following the establishment of Israel in 1948. She died in Beirut in 1986.

These memoirs have long been acclaimed by Middle East historians as an essential resource for the social history of Beirut and the larger Arab world in the 19th and 20th centuries.

Anbara Salam Khalidi (1897 - 1986) was a feminist, activist, writer and translator of classic literary works into Arabic. Her memoirs were published as Memoirs of an Early Arab Feminist (Pluto, 2013).

'A truly exceptional woman. Her book stands witness to a momentous period; throughout, she was in the vanguard of reform' - Marina Warner, from the foreword

'A fascinating record of experiences witnessed by a pioneer feminist in Beirut whose name is rightly synonymous with the feminist, social and literary renaissance of the Arab East' - Kamal Salibi, prominent Lebanese historian and former Professor of History at the American University of Beirut

Translator’s Acknowledgments
List of Illustrations
Prologue
1. Upbringing and family
My first school; Other childhood memories; Means of transport and new inventions; Weddings and funerals
2. Political events before the First World War
The trip to Cairo; My education (continued); Awakenings; The reform movement; The Paris Conference; The “Yellow” peril; First signs of a secret revolution; My studies at home; The Society for the Awakening of the Young Arab Woman
3. An engagement that was not completed
Jamal Pasha and his iniquities; The war period and my meeting with Jamal Pasha; Workshops and refugee shelters in wartime; The Muslim Girls’ Club and Ahmad Mukhtar Bayhum
4. The war’s end
Occupation and the Mandate; The Syrian Congress; My father’s opposition to the Mandate and his exile to Duma; French vindictiveness and severe financial losses for the family; The Lake Huleh story
5. Society for Women’s Renaissance
My trip to England; Returning to Beirut; Unveiling; The progress of feminism; Feminist conferences; Some pioneers of feminism
6. Back to the literary scene of the 1920s and beyond
Some women literary figures
7. The story of my marriage
Palestine my homeland; British policy in Palestine; Palestinian women; Zionist propaganda; Our literary and social life; Deir Amr; The Jericho Project; Jerusalem and the Arab College; Back to family life; My children
8. Exile
Loss of homeland, loss of partner
Index
Published by Pluto Press in Apr 2013
Paperback ISBN: 9780745333564
eBook ISBN: 9781849648837