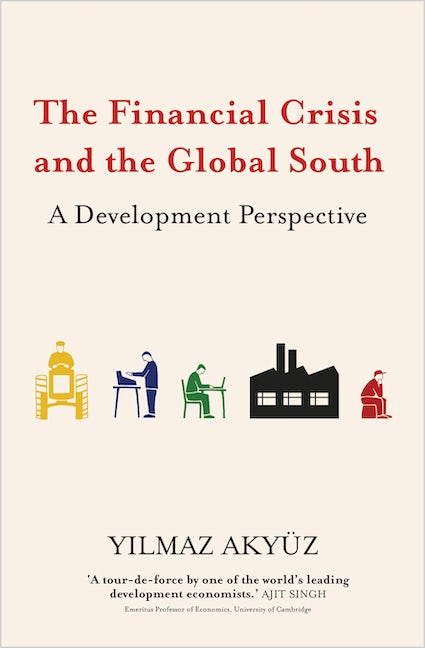 The Financial Crisis and the Global South

Explores the policy options available for developing and emerging economies in response to the global economic crises.

This book is a major contribution exploring the policy options available for developing and emerging economies in response to the global economic crises.

Written by a highly respected development economist, the book gives a clear-eyed account of the issues particular to these countries and critically evaluates different policy approaches, including reforms in financial, monetary and trade policies. Informed by deep scholarship as well as practical experience, Yilmaz Akyuz draws on empirical data, historical context and theoretical expertise, with special attention paid to issues such as the role of the International Monetary Fund and China.

The Financial Crisis and the Global South is a landmark book that will be of interest to practitioners, scholars, theorists and students of economics and development studies.

Yilmaz Akyuz is Chief Economist at the South Centre and Former Director and Chief Economist of the United Nations Conference on Trade and Development. He is the author of The Financial Crisis and the Global South (Pluto, 2013).

'The best study of the ongoing economic crisis not only from a development perspective but from a balanced and holistic point of view' - Rubens Ricupero, former Brazilian Finance Minister, former Secretary General of UNCTAD

'A tour de force by one of the world's leading development economists' - Ajit Singh, Emeritus Professor of Economics, University of Cambridge

'One of the best development economists of our time, writing in clear, nontechnical prose about the crisis in the context of the institutions governing the whole world economy -- and their malfunctions.' - Professor Robert Wade, Department of International Development, London School of Economics, winner of the Leontief Prize in Economics (2008)

'This timely volume not only dissects the causes of the 2008 crisis, but provides a rich discussion of the development issues at stake in light of the slowdown in economic growth in the US and Europe' - William Milberg, Professor and Chair, Department of Economics, New School for Social Research

'This excellent book provides an expert analysis of global economic interdependence. Its arguments are presented briefly and persuasively with a wealth of supporting evidence.' - Emeritus Professor Robert Rowthorn, Faculty of Economics, University of Cambridge

'A comprehensive overview of the major policy challenges that developing countries face in this new economic era following the 2008-9 financial crisis and subsequent global economic slowdown' - Jomo Kwame Sundaram, Food and Agriculture Organization of the United Nations, former Assistant Secretary-General for Economic Development in the United Nations Department of Economic and Social Affairs

'A unique book and a very important antidote to the rose-tinted presentations about emerging economies as the new engines of growth and the great wealth shift. This work has important implications for rethinking development policy' - Richard Kozul-Wright, Head, Unit on Economic Cooperation and Integration Among Developing Countries at UNCTAD

'This book closely reflects current concerns and issues in international trade, finance, payments and monetary systems, and development. The coverage is adequate and appropriate; the tone is perfect' - Manuel Montes, Senior Advisor on Finance and Development, The South Centre, former Chief of Development Strategy and Policy Analysis in United Nations Department of Economic and Social Affairs (UNDESA)

Introduction
1. Policy Response to the Global Financial Crisis: Key Issues for Developing Countries
2. Global Economic Prospects: The Recession May Be Over But Where Next?
3. Export Dependence, Sustainability of Growth and Adjustment in China
4. The Subprime Boom-Bust Cycle and Capital Flows to Developing Countries
5. Why the IMF and the International Monetary System Need More Than Cosmetic Reform
Conclusions
References
Published by Pluto Press in Apr 2013
Paperback ISBN: 9780745333625
eBook ISBN: 9781849648950