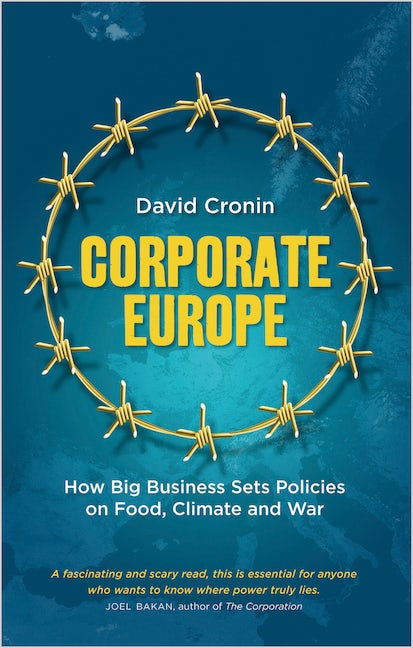 How Big Business Sets Policies on Food, Climate and War

Reveals how the EU's policies on health, climate change, armaments and food safety have been tailored to please a corporate elite.
During the chaos of the eurozone crisis, few mainstream commentators have stopped to question the purpose of the European Union itself, and whose interests it serves. Corporate Europe goes beyond the divisions between nation-states, focusing instead on the division between the corporate elite and the peoples of Europe.

David Cronin spent a year investigating the privileged access that big business enjoys in Brussels. In this book, he reveals how the EU’s policies on health, climate change, armaments and food safety have been tailored to please an unaccountable elite. Making extensive use of previously unpublished documents, he explores how ideologically blinkered lobbyists have seized on the financial crisis of recent years to entrench the casino capitalism that caused the crisis in the first place.

What emerges is a powerful exposé of how vested interests in the EU have manipulated opportunities to introduce ideologically-driven reforms.

'Exposes the anti-democratic, pro-corporate agenda at the heart of the EU. This is a devastating indictment that should be required reading for every European citizen' - John Hilary, Executive Director, War on Want 'Rigourously researched, elegantly written, and brilliantly analysed, Corporate Europe reveals the rising power of corporations to set policy and govern our lives and societies. A fascinating and scary read' - Joel Bakan, author of The Corporation: The Pathological Pursuit of Power 'Shows how corporate lobbyists dominate the EU - boosting the 1% and harming the interests of the rest of us. A necessary call to retake Europe' - David Miller, author A Century of Spin: How Public Relations Became the Cutting Edge of Corporate Power
Acknowledgements
A short guide to the European Union
List of acronyms
Introduction
1. Wrecking the welfare state
2. Bombarded by bankers
3. War is good for business
4. How we live and diet
5. Smoke and mirrors
6. Cheating on climate
7. The malign legacy of Peter Mandelson
Conclusion: Taking Europe back
Notes
Index
Published by Pluto Press in Aug 2013
Paperback ISBN: 9780745333328
eBook ISBN: 9781849648981